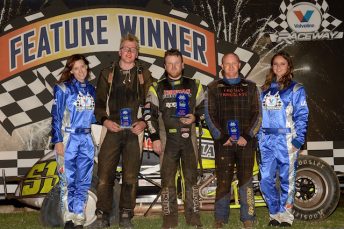 He was even luckier as he managed to take the win after passing his brother Jeff on lap sixteen.

It was another entertaining race on a dry racetrack. Jeff Thomas took the lead from Troy Carey on lap four and looked likely to win the main event. But it wasn’t to be as Dean got to lead and recorded his first main event win since October 20, 2014.

Finishing third was Luke Sayre who was on an absolute charge to finish third from his starting position of fourteen. Fourth home was Mark Blyton who was doing double duty in both the winged and wingless.

He was followed by Chris McInerney, Troy Carey, Nathan Dicker who once was one of the big movers after starting from position twenty, Marshall Blyton, Nikki Briton and Lou Pacchiarotta rounded out the top ten.

All twenty four cars finished on the lead lap.

The next event on the NSW Wingless Sprints calendar is next Saturday night, November 12 when the club makes its first visit to Gilgandra for the season.

The NSW Wingless Sprints would also like to acknowledge Aussie Forklift Repairs for their wonderful support of the 2016/2017 Club Championship.