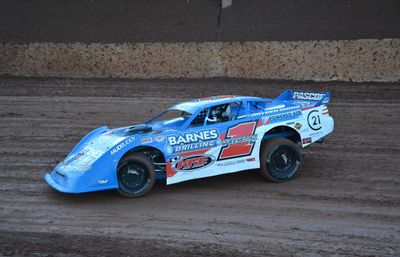 In a masterful performance that belied the quality of the field assembled to contest the second running of the Super Sedan GP53 memorial event at Archerfield Speedway on Saturday night (May 15), Matt Pascoe delivered a faultless display to dominate round 12 of the McCosker Championship Series and secure his second victory in the race staged in honour of his late father. Despite starting from the outside of row four, Pascoe wasted little time in surging to the front before clearing away from the field to score an emphatic win over the Victoria-based duo of Michael Nicola Jnr and Ash Bergmeier, with Townsville’s Trent Wilson and another Victorian in Jamie Collins rounding out the top five.

A 34-car field of Super Sedans would hit the track for time trials, the results from which would seed the heat race fields, and it was Tasmania’s Steve Latham who topped the timesheets to secure himself the prime grid spot in the opening heat. Fresh from his success in the Long Track Classic in Leeton a few weeks earlier, Collins was second quickest ahead of Barry Craft, Tania Smith and Wayne Randall, whose fire-breathing RX7 would not be seen again. Hayden Brims, Sam Roza, Bergmeier, Michael Hally and Wilson rounded out the top ten.

Latham would lead the field away in the opening heat and remain out front at the chequer despite a frantic finish from Darren Kane who, once clear of the pack, was circulating half a second quicker than everybody else in his pursuit, leaving Hally a distant third.

Roza was the early leader in heat three until he slowed in turn two and headed infield with a problem that would prove terminal, handing the lead and the race to Barry Craft. Making a welcome return to the Super Sedan ranks, Lachlan Onley finished second ahead of Nicola.

Pascoe then prevailed in heat five in advance of Kane and Colin Kaine, with Bob McCosker leading home Musch and Nicola in heat six.

After striking trouble in hot laps, Steve Jordan bounced back to lead the field home in heat seven, with Mark O’Brien and Gary Pagel filling the minor placings.

The final heat of the night saw Black secure his place in the pole shootout with a win over Nicholas O’Keefe and Tyson Moon, with a three-wide pass from Wilson elevating him to fourth.

In a preview of what was to come courtesy of his father in the feature race, Zac Pascoe was terrific in the B Main as he used the highline to round up the field and surge to the front. Pole sitter Nicholas O’Keefe was amongst those unable to keep Pascoe at bay and he would settle for second spot, with Leigh Williams and Hayden Brims also securing a spot in the feature field. Having led the opening laps of the race before faltering in turn two and being assisted to the infield by the pursuing pack, Harper was also granted a start in the feature race as the promoter’s choice.

The opening round of the Pole Shootout would see Onley and Latham eliminated as Collins and Nicola advanced to take on Wilson and Musch. It was Nicola and Wilson who topped the timesheets in round two before continuing their advance in the next clash when they eliminated Pascoe and Black. The final showdown would bring Bergmeier and Kane into the mix and it was the latter who looked on track to clinch the $500 bonus courtesy of KRE Race Engines, only for Wilson to snatch the cash on the final lap of the session.

As top qualifier, Wilson would start the feature race from position 10 and select which of his rivals would share row fiv. Given his remarkable record so far this season of top five finishes in every round, it was perhaps no surprise that Black was the chosen one. It would be Musch who found himself on pole position once all the selections had been made, with Latham alongside. Bergmeier and Onley would launch from row two, followed by Collins and Nicola, with Kane and Pascoe sharing row four. Latham saw his victory aspirations all but disappear in the first turn when he bounced high and invited the field to file underneath, dropping ten spots as Musch led the opening laps. Pascoe was quickly on the move further back, running the highline to round up his rivals and advancing into the top five after just five circulations. When Musch spun infield in turn two, Bergmeier and Nicola found themselves fighting for the lead as Pascoe continued his charge. The first restart came courtesy of a spin from Zac Pascoe that ended his race on lap 14 and, when Kane looped in the same spot just two laps later, Pascoe Snr had already assumed the lead. The race was delayed at lap 18 when a pile-up in the back straight eliminated Pagel, Craft, Hally, Brims and Kane, while Williams would persevere for a while before also retreating to the infield. With 36 laps to run, Pascoe was in control and never found himself under any pressure from this point, negotiating lapped traffic with ease and ultimately finishing more than eight seconds clear of Nicola. Having finished fourth in the inaugural GP53, Bergmeier improved to be third on this occasion, with Wilson finishing very strongly to secure fourth in advance of Collins and Black, whose sixth-place finish as the last runner on the lead lap was, quite remarkably, his worst result in what has been a stellar season for the Toowoomba team. Jordan and Onley were next in line, although the latter would be excluded from the results due to a noise infringement, leaving Latham, O’Keefe, McCosker and Tyson Moon as the remaining finishers, with Harper making a steamy exit on lap 36.

Following heat wins to Matt Hardy, Cody Simmons, Thomas Vickery and Bruce Marshall, it was Hardy who proved too strong in the feature race to win round nine of the Shock Absorber Therapy AMCA Nationals Track Championship. Hardy rediscovered his very best form to lead every lap of the feature race in a dominant display. Shane McKinnell finished in second spot despite the best efforts of Bruce Marshall, who advanced from the fourth row of the grid to secure third. Steve Potts and Cody Simmons rounded out the top five, followed by Paul Reeves, Michael Denning, Thomas Vickery, Aaron Knox and Brett Robotham, who looked on track for a top five result in the early laps before backsliding through the field.

A big field of Wingless Sprints ensured there was plenty of action throughout the night, culminating in a thrilling feature race that wasn’t decided until the final lap. Having led from the outset, Robert Mazzer found himself under intense pressure over the last few laps as Mark Blyton and Jason Bates chased him down. At one stage, the trio ran three wide into turn three as Bates leapfrogged into the lead, only for Mazzer to reclaim the spot through turn four. With two laps remaining, Blyton was sitting in third spot before a remarkable finish saw him dispose of Bates and then dive underneath Mazzer through turn one on the final lap to clinch a last gasp win. Bates finished third, but there was less than half a second separating the trio at the finish. Dave Eggins was home fourth ahead of Kevin Willis, Paul Robinson, Seiton Young and Brody Thomsen, who advanced from the B Main, with Daniel Nikifiroff and Michael Butcher completing the top ten.

Heat wins were shared between Mazzer, Eggins, Willis, Butcher, Young and Jayden O’Toole, while Lachie Robertson prevailed in the B Main over Dan Moes, Thomsen and Ben Matchett, who came from deep in the field to out-muscle Jamie Usher on the last lap and secure the final spot in the feature.

After an incident-free brace of heat races that resulted in wins to Tyson Snow, Sean Rose, Ben Walker and Dan Lewis, the Modlite feature race descended into chaos with Adam Bradford, Warren Hooper and Will Butler all flipping out in separate incidents. In the end, it was Terry Leerenetveld who again reigned supreme to take out round three of the Dondex/Redcliffe Wrecking Extreme Series. Lewis and Snow filled the minor placings in the main event, followed by Kyle Honour, Dylan Hunter, Callum Beerling and Sean Rose, who led the opening laps after qualifying on pole position. Chris Fing and Phil Gower were next best, with Abi Meehan, Andrew Carrick and Mark Webster the only other finishers.

Bodie Smith and Harry Stewart filled the top two spots in each of the Compact Speedcar events, winning a heat race apiece before finishing first and second respectively in the feature. Andrew Parkes finished third in both heats but had to settle for fourth in the feature behind Mitchell Rooke, with Dave Collins bouncing back from a heat race rollover to finish fifth.

Open Sedan A heats went the way of Colin Morris and Brad Trussell, who would also take the feature over Les Eisenmenger, Morris and David Mortimer, while Greg Akers prevailed in the Open Sedan B feature in advance of Elgan Dalton, Mark Anderson, Josh Manser and John Woolf.

Racing continues at Archerfield Speedway next Saturday night (May 22) with round 13 of the East Coast Logistics Sprintcar Track Championship, plus the Petzyo Sprintcar Development Series and the Queensland Lightning Sprint Championship, along with Formula 500s, Microsprints and Stockcars.