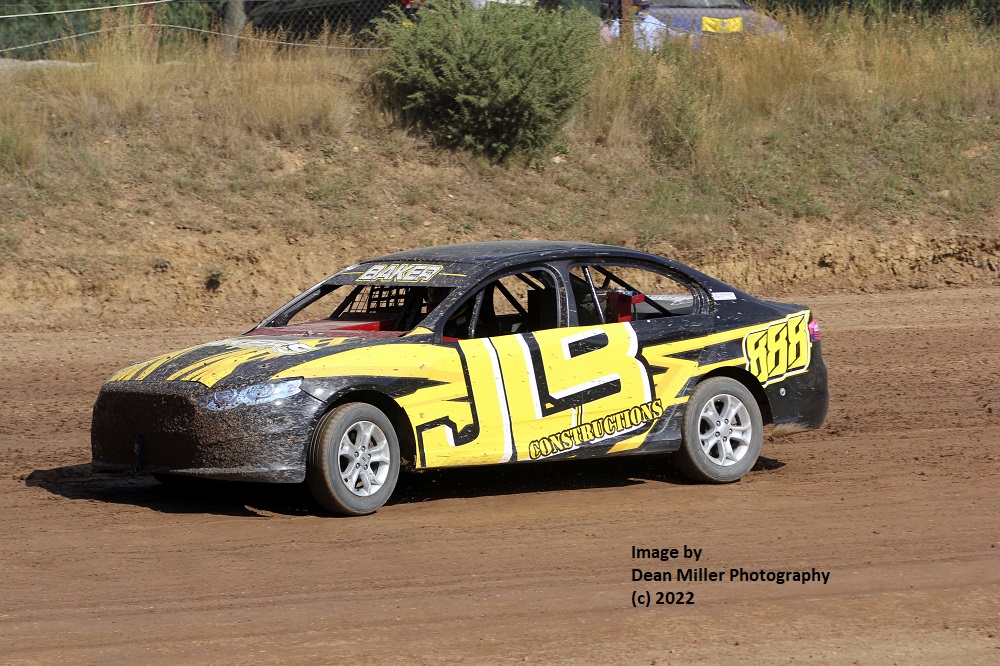 Daylesford Speedway’s latest two-day show has been run and won with the Crash and Bash Association the main event of the weekend. Across the weekend Jarrod Hughes and Kath House-George performed well and took wins in the Open and Ladies Crash and Bash classes whilst Daylesford Speedway Club members were also amongst the wins with Tim Hutchinson winning Standard Saloons, Arthur Hutchinson winning Junior 1200cc Sedans, Jayden Humphrey winning the Daylesford Modifieds, Katie Meyer the Daylesford Ladies, Bailey Kakoschke the Daylesford Juniors, and Jhon Baker won the Street Stocks.

Starting with the main class of action for the weekend the Crash and Bash Association Open class, after a serious accident on the Saturday which has left a passenger in hospital broken and bruised, the weekends schedule was put out of whack, the drivers competed in three heat races each before the feature race.

With the drop of the green flag to signal the feature race start, Mark Hebblethwaite moved to the front of the field with Steve Mitchell, Jarrod Hughes, Bradley Trainor, and Ron George the top five. The action was furious at the front with Jarrod Hughes and Trainor passing Mitchell the very next lap before a stoppage to clear the track from debris.

Hebblethwaite was still out front at lap five of the race with Trainor the second place from Mitchell, Daniel Kettels and Jarrod Hughes. The bonnet of Hebblethwaite came unstuck and he was black flagged by stewards out of the race.

Trainor took over the lead on lap six with Mitchell shuffling up to second from Kettels, Jarrod Hughes and Ron George the new top five. A broken tie rod end to Kettels and a flat right hand side tyre for Trainor put them both out of the race.

Jarrod Hughes took over the lead from lap nine and was not headed from there with Mitchell, Clint Robinson, Leon Argent and Jaydan Taylor the top five finishers.

The result in the Ladies Crash and Bash final finished with Kath House-George the winner from Laura Crane, Danni Marshall, Taylah Hughes and Nikki. It was a terrific win for House-George who has a few seasons of racing under her belt chasing others and now is one of the top runners in the division.

Victorian Speedway Council Standard Saloons final on Sunday finished with Tm Hutchinson who had competed in Portland on the Saturday night winning from Dean Pederson making it a Daylesford one and two at the finish line with Bailey Sinclair, Rick Stowe, and Andrew Cormack the top five. Sinclair and Stowe both are Ballarat based race drivers.

In the Junior 1200cc field Arthur Hutchinson the nephew or Tim, took another win in the class he is currently dominating. Bryce Leek finished in second cementing himself as one of the top three currently based on results with Riley Taylor in third. Next was Xander Baxter and Ella Sheedy.

Daylesford Drivers Association classes were all in action for the weekend also with the Daylesford Modifieds results finishing with Luke Humphrey taking the win from Reece Kakoschke, Coby Kakoschke, Ricky-Lee Basten and Jayden Humphrey. The Kakoschke boys in their first season of open aged racing keep themselves up the top end of the class point score for the season.

In Daylesford Street Stocks Jhon Baker stepped up to take the win from Chris Hay, Des Robinson, Stephen Brook, and Dylan Reeves. Hay and Robinson continue their consistency as they chase the season point score that Robinson won last year and Hay finished in third.

For the second meeting in succession Katie Meyer has won the Daylesford Ladies final when she defeated Richelle Jenner, Charmaine Bryans, Marlena Argent and Chloe Graham.

Rounding out the weekends results was the Daylesford Juniors where Bailey Kakoschke took the win over Rhys Meakins, Charlee Baker, Peyton Edwards-Daly and Peppa Bannon. Great to see still so many new Junior racers continue to drop into to the class for a spin.