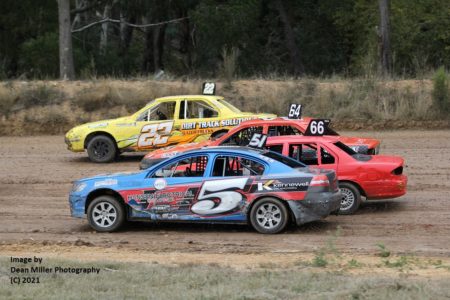 Daylesford Speedway produced a fine day’s entertainment on Anzac Day after a wonderful tribute at the speedway created by Returned Services League subbranch, Daylesford and led by Jim Walker and Keith Cole. The track built in the late 1950s is Australia’s longest running continuous Speedway and today is managed by a hard-working committee of the Daylesford Drivers Association elected by members.

The club held an Anzac ceremony prior to racing at the spectator viewing area flagpole and RSL plaque led by David Parker on behalf of the Daylesford media team and then got stuck into Anzac Cup racing.

The Daylesford Modifieds Anzac Cup field had a great line-up of cars with handy steerers from around the great Daylesford area and mostly drivers from the West of Melbourne. Brad Trainor in his new Daylesford Modified sedan took the win in front of Ryan Daly, Matthew Brooks a new club member in his first race as a Daylesford Modified competitor with Leon Argent in fourth and Codey Millican in fifth place.

Josh Cormack took his first feature win when he won the Standard Saloon Anzac Cup. The Cormack family are becoming famous for being a travelling clan of racers and they finished in three of the top five places. Josh Cormack defeated Dean Pedersen who is a consistent podium placegetter at Daylesford, Nathan Hutchins, Aaron Cormack, and Troy Cormack.

Mick Dann one of Australia’s best Street Stock race drivers won the Street Stock version of the Anzac Cup as he out gunned Jayden Blomeley and Chris Hay two drivers in the top five points for the club championship. In fourth was Ellen Vagg with Des Robinson the club’s top points scorer so far this season in fifth

Reece Kakoschke had another victory in the Daylesford Juniors. With points for the club’s season point score including finishes in heats and finals, the points could be tight between Reece and Bailey Kakoschke and Bailey kept himself in the picture with his second spot. Peyton Edwards-Daly finished on the podium in third.

RIckylee Basten continued her winning ways with victory in the Daylesford Ladies Sedans. Rachel Robinson and Jane Laidler rounded out the top three in the feature Ebony Trainor finished fourth and Richelle Jenner in fifth.

The next race meeting is May the 8th and 9th, find Daylesford Speedway on social media for more details.