Day makes it a four-way battle for the title

Day makes it a four-way battle for the title 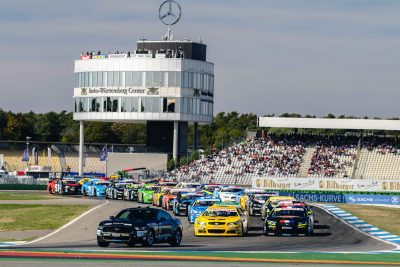 Euro NASCAR fans enjoyed another incredible race at the Hockenheimring. Alon Day (#54 CAAL Racing Toyota Camry) struck back in the second Semi Final of the NASCAR GP Germany and edged Loris Hezemans (#50 Hendriks Motorsport Ford Mustang) in a bumper-to-bumper duel for the win in the last race of the weekend. Frederic Gabillon (#3 Tepac RDV Compétition Ford Mustang) relinquished the points lead after a crash with Salvador Tineo Arroyo (#56 CAAL Racing Toyota Camry), while Lucas Lasserre (#33 Mishumotors Chevrolet SS) took advantage of the situation to jump to the top of the standings.

Four drivers – Lasserre, Day, Gabillon and Hezemans – will enter the October 20-21 Circuit Zolder Finals separated by a mere 12 points, making the 2018 battle for the Euro NASCAR title one of the most exciting in the Series’ history.

“It was a bittersweet weekend with my big mistake on Saturday. I am sorry for the team because I got a big hit in the championship standings yesterday,” said Day, who fended off every attack Hezemans brought for 17 laps. “I will not do the same mistake twice. I knew it wouldn’t be easy today and I’m sick of winning racing by defending against others. But I know Loris has a great car. It was a great and clean fight. I hope to score a double win at Zolder as I did the first time we went there. We will try even harder.”

Day won his 15th career Euro NASCAR race, the 5th of the season and became the first driver to win a race at every track NWES visits in 2018.

“I’m really satisfied with this result,” said Hezemans, who holds a considerable lead in the Junior Trophy and made his way back into ELITE 1 title contention. “The second place is a really good result. I did too many mistakes but Alon also drove a perfect race. He defended really well. It was a great race without contacts, just close racing. You never know, maybe I have a shot at the championship right now. Let’s take it day by day, race by race and turn by turn.”

A brilliant Lucas Lasserre came from seventh on the grid to third under the checkered flag and jumped to the top of the standings with his #33 Mavi Mishumotors Chevrolet.

“That’s a solid result,” said Lasserre who also acts as his own crew chief at Mishumotors. “We had a good bunch of technical issues this weekend but we managed to finish on the podium two times and that is really good for the championship. I want to thank Mishumotors’ owner Mirco Schultis, Mavi and all the Mavi guests who supported us here this weekend. I’m really happy. Now it’s going to be very important to regroup, breath and prepare the car as well as possible. In Zolder we have a shot at winning the Euro NASCAR title, but it will be hard work for my team and Mirco. I want to thank all my mechanics, who did a tremendous job this weekend.”

Frederic Gabillon (#3 RDV Competition Toyota Camry) suffered heavy damage to his car on lap 11 in a contact with Tineo and was relegated to 20th under the checkered flag, falling from first to third in points.

Four drivers will be contending for the championship at Zolder, making the 2018 Finals one one of the most exciting events in Euro NASCAR history: Lasserre now leads Alon Day by a mere 2 points. Gabillon follows two points further back and Hezemans sits 12 points behind the leader.

The ELITE 1 Finals will take place at the legendary Circuit Zolder in Belgium on October 20-21. The championship is on the line and the battle is tighter than ever. All the action from the NASCAR GP of Belgium will be streamed live on Fanschoice.tv, Motorsport.tv, the NWES Facebook page and YouTube channel and a vast network of websites and social media profiles around the world.