A day of firsts: double podium finish for the Asia Talent Team in Portugal

A day of firsts: double podium finish for the Asia Talent Team in Portugal 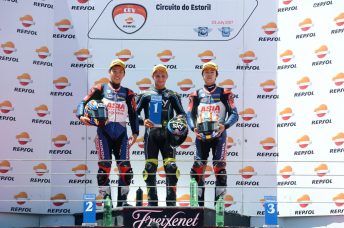 Kazuki Masaki and Ai Ogura took an incredible double podium finish for the Asia Talent Team in the fifth round of the 2017 FIM CEV Repsol Moto3™ Junior World Championship, with Masaki battling for the win before taking second and Ogura completing the podium in style. Yuki Kunii sadly crashed out of contention from the leading group, and Andi Farid found his race ended early after an incident at Turn 1.

Dry and sunny conditions greeted the grid on race day, but the wind that had hampered some in free practice – and faded for qualifying – was back, making the 17 lap race a challenging one for the more than 40 bikes lining up for the single Moto3™ race at Estoril.

Ogura got a great start from the front row, taking the lead into Turn 1 and holding it until an attack from fast-starting Championship leader Dennis Foggia – but the Japanese rider hit straight back and held the lead over the line after Lap 1. It wasn’t long before teammates Masaki and Kunii were right behind their compatriot, with the three Asia Talent Team riders running as a trio in the lead group of six.

On Lap 6/17, Kunii then suffered a highside out of podium contention, with the Japanese rider sadly sustaining a broken arm and being transferred to hospital for treatment. It was a bad luck ending for the frontrunner after the Japanese rider had shown fantastic pace in the opening stages of the race.

Back at the front, Masaki and Ogura remained right up in the fight, with the former hounding Dennis Foggia throughout the final laps in a bid for victory and a second duel just behind that saw Ogura battling Aaron Polanco for the final podium position.

Ogura took third from Polanco into Turn 1 on the final lap, defending his position until the Spaniard then suddenly crashed out of contention – leaving Ogura with a clearer track and only the remainder of the last lap to face down. Staying calm under pressure, the Japanese rider kept it all together to take his first ever rostrum finish in third.

Masaki tried for a final push for the win against Foggia through the latter half of the lap, but the Italian kept the door firmly closed to cross the line for the win. But the Japanese rider was a close second, impressing once again and taking half of the Asia Talent Team’s first double podium of the season in style – also his first ever podium in the Junior World Championship.

Andi Farid was caught up in a first corner incident and highsided out of contention in Turn 1; the Indonesian suffering a short race after contact early on in what turned into a race of attrition for a number on the grid – but rider ok.

Next up the Asia Talent Team will be back in action in Jerez after their summer break – with action set to resume in southern Spain on the weekend of September 17th. Kunii will use the break to try and recover to full strength as quickly as possible, with reigning Asia Talent Cup Champion and teammate Somkiat Chantra also hoping to get back on track after sitting out the last two rounds.

As always all of the action can be followed on FIM CEV Repsol YouTube channel.