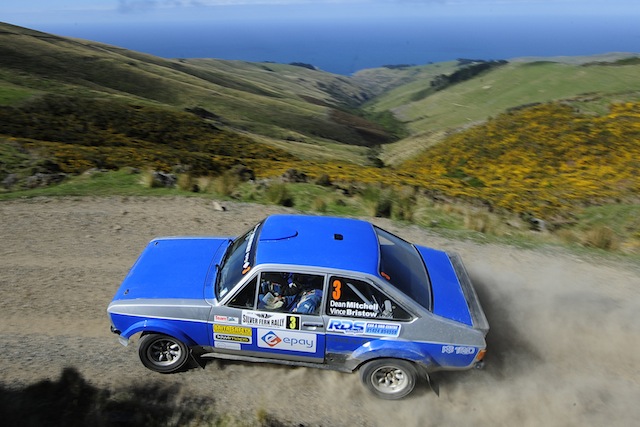 Vince Bristow/Dean Mitchell of the UK have seized the lead by the barest of margins on the 2014 epay Silver Fern Rally tonight as the cars arrived
in Timaru at the mid point of this year’s event but it had been a dramatic day on the roads of Banks Peninsula and South Canterbury.

the overnight leader had to battle the challenge of being first car on the road and having to sweep away the thick gravel with the conditions being better for the cars down the order.

Judd described the morning stages on Banks Peninsula as “challenging and eventful.”

On the second stage of the day he spun and bent the steering and then after repairs he copped a puncture, having to drive 3.4 kilometres with a flat
tyre.

The incidents saw his healthy lead eroded to just 10 seconds with two stages remaining in the day.

Then on the penultimate stage of the day Bristow took the fastest time and took the lead by 4.6 seconds.

Bristow had been late for the start of the stage after driving past his service crew and having to return to refuel.

Judd had one final stage on Day 4 to grab back the lead but after third placed Brent Rawstron and Ian McKee of Christchurch rolled their Ford Escort on a slowish corner the final stage was cancelled leaving Bristow in front with a narrow margin over Judd.

Third after the drama of the day was Englishman Simon Tysoe while Australian John Spencer is fourth, Shane Murland fifth and David Hills
sixth.

Two of big names of New Zealand rallying from several years ago, Shane Murland of Paraparaumu and Brian Stokes of Waikuku, showed plenty of
speed today but it was a day of high drama, action and excitement.

Casualties included John Hills of Australia with clutch issues and Gary Smith of Hamilton with his second broken diff in two days while
Irish driver Frank Cunningham confirmed his withdrawal this morning after going over a bank in Monday’s final stage.

David Hills, son of John Hills, broke a rim and also had starter motor issues. Kevin Blackley of Palmerston North also stopped late in the
the day after running sixth overall in the event.

There were also several cars suffering problems in what turned out to be the final stage of the day although several got going again.

In the Challenge Section of the event four-time National Champion Bruce Herbert won all the morning stages in his Mitsubishi but it is Dave
Strong/Rob Scott of Auckland in their Honda Civic R who maintain a healthy lead ahead of Garry Adcock/Mark Dalton of Nelson (BMW M3 CSL)
and Dunedin pair Brodie Anderson/Rob McConachie (Ford Escort).

Andersonand McConachie will be hoping to hold their position tomorrow as the rally rolls into home territory for them.

Some of the pacesetters in the Challenge have been setting fast stage times but off road excursions and mechanical problems have cost them dearly. Brent Taylor/Chris Ramsay of Cambridge, Chris Woudenberg/Veronica Ordish of Auckland and Herbert/Jim Hey of Palmerston North have all struck a variety of problems in the first four days of the event.

Past Silver Fern competitor Willie Rutherford, who passed away in 2011, was remembered in a Special Stage today with Stage 21 named Willies
Pleasure.

Fittingly Allan Dippie of Dunedin who is at the wheel of the Porsche formerly driven by Willie said he had really enjoyed the stage.

Tomorrow the cars leave Caroline Bay for five Special Stages prior to a lunchtime Service Park at Kurow.

They resume with stages at Dansey’s Pass and Silverpeaks before arriving in Dunedin at Mitre 10 Mega at 5.10pm.

On Thursday night the cars overnight in Invercargill and on Friday night in Wanaka before the finish in Beach Street, Queenstown at 3.15pm on
Saturday afternoon.