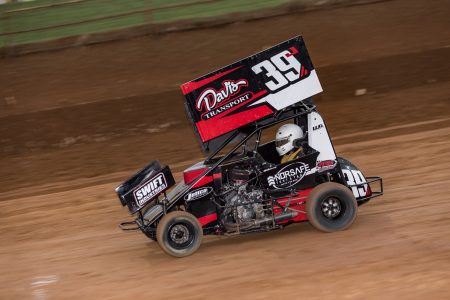 Proving that age is no barrier since graduating from Junior Formula 500s and making the big step up into senior competition this season, youngster Brodie Davis has already begun to display promising signs in the opening stages of his senior career.

Turning 16 back in November and immediately removing the restrictor plate from his FNQ # 39 Norsafe Test & Tag supported Swift, Davis wasted no time in getting his introduction to senior competition underway, travelling to Cairns International Speedway just days after his birthday where he enjoyed an encouraging debut.

Impressively making his way up to second place during the feature race before unfortunately losing a chain which dashed his hopes, Davis didn’t let himself become discouraged. Later contesting his second senior outing at Pioneer Park Speedway, Davis backed up his front-running pace, racing within the top five until suffering overheating issues.

“Even though we’ve experienced issues in our first two senior race meetings, we’re really happy with the car and the consistent pace we’ve had,” said the Cairns, Queensland-based racer, whose family is originally from Victoria.

Currently preparing to participate in Formula 500 Speedweek, which will take place at a range of tracks throughout Victoria over the Christmas-New Year period, Davis will be based in the speedway-oriented town of Warrnambool with his uncle and leading 410 Sprintcar racer Darren Mollenoyux, who won the 2004 Australian Formula 500 Title, and his aunty Deanne, who also competed in Formula 500s.

“I’m really excited to go up against some of the country’s best Formula 500 drivers, as well as some American drivers, during Speedweek,” enthused Davis, who in addition to Speedweek will also be racing at Premier Speedway on January 6.

“It’s not only going to be a fantastic opportunity to learn from so many experienced racers but also competing at a range of different tracks. We are not putting too much pressure on ourselves, but apart from getting as many laps as possible, it would be great to qualify into the feature race throughout the series.”

In addition to Davis’s ongoing sponsors, in particular DC Mechanical Repairs, who have been long-time supporters of Davis since his karting days, Sharps Repairs Mackay and Dig n Dump Earthworks Repairs have come on board to support his Speedweek campaign and Davis and his team would like to thank them and welcome them on board.

To find out more about Davis and his team, LIKE them on Facebook by searching Brodie Davis Racing.