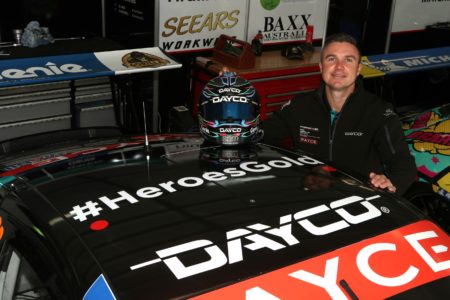 Russell, who will be competing in the #23 Dayco Porsche Carrera Cup GT3 car at Australia’s largest domestic motorsports event, has answered the call of The Christian O’Connell Breakfast Show on GOLD104.3 seeking support from the community to promote a special brew of beer, Heroes Gold, which has been developed to raise funds for the Victorian Bushfire Appeal.

Heroes Gold was created by the popular Melbourne Breakfast radio show host in conjunction with independent brewer Hawkers to assist in raising funds for the Victorian Bushfire Appeal. The popularity of O’Connell’s fund-raising concept has seen the first round of pre-orders for Heroes Gold completely sold out, with more than 650 cases sold in its first three days of availability.

O’Connell made the call on his popular show seeking billboards to promote this most worthy of beer brews earlier this week and he was inundated with offers of support. Russell made the generous offer to race with the Heroes Gold hashtags and logo over the weekend at the opening motor racing event of the 2020 season in front of more than 250,000 spectators and many more television viewers.

The stunning black #23 Dayco Porsche GT3 Carrera Cup Car will feature Heroes Gold hashtags below the front headlights along with Heroes Gold signage on the roof of the car throughout the three day Superloop Adelaide 500, which will be broadcast live on Network Ten and Foxsports from Friday February 20 to Sunday February 23.

“Being from a country town myself, it is great to do our bit as a team to assist in the bushfire fund raising effort and I’m hoping to deliver our bushfire heroes some strong results at this opening round. I am sure that Heroes Gold will look great on our black beauty in Adelaide this weekend and encourage more Aussies to take part in this fantastic fundraising initiative,” stated Dayco Racing Porsche team driver, David Russell.

Christian O’Connell from The Christian O’Connell Breakfast Show on GOLD104.3 said, “What a partner to come onboard. A huge thank you to Dayco for working with GOLD104.3 to raise funds for the Victorian Bushfire Appeal. We are lucky at GOLD104.3 to have such strong support from our audience for this incredibly worthy cause, Heroes Gold and the Victorian Bushfire Appeal.”

Russell will be racing at the Adelaide Parklands Street Circuit in his Dayco Porsche Carrera Cup GT3 car from Friday to Sunday at the Superloop Adelaide 500 with all races broadcast live on Network Ten and Foxsports across the country (all times SA local):

The practice and qualifying sessions will take place on Thursday and Friday.