Dates and venue confirmed for Mazda Road to Indy Shootout

Dates and venue confirmed for Mazda Road to Indy Shootout 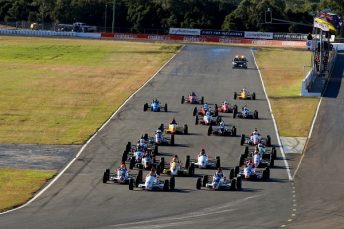 The 2017 Australian Formula Ford Champion will battle it out with 19 other series winners from some of the most competitive open-wheel racing categories around the world, when the Mazda Road to Indy (MRTI) $200k Scholarship Shootout takes place on 9-10 December.

This year’s MRTI Shootout will be held on the Bondurant main track at Wild Horse Pass Motorsports Park, and the Shootout winner will receive $200,000 from Mazda to assist in graduation to the 2018 Cooper Tyres USF2000 Championship –the first official step on the Mazda Road to Indy ladder system, which provides a pathway for talented drivers to progress all the way to the Verizon IndyCar Series and the coveted Indy 500.

As well as driving Formula Mazda cars around the circuit, competitors will be evaluated off-track by a judging panel, on their performance in areas such as marketability, presentation and attitude.

Last year’s MRTI Shootout winner, Oliver Askew parlayed his scholarship opportunity by winning the USF2000 title, and will now move another step up the ladder to the Pro Mazda Championship in 2018.

“Oliver Askew is proof of what the Shootout can lead to for a young driver,” said John Doonan, Director of Mazda Motorsports in North America. “With very little experience in race cars, Oliver won the inaugural $200,000 scholarship and turned it into a USF2000 championship in 2017. He is the embodiment of whatthe Mazda driver development scholarships are all about: giving young drivers the opportunity to move up the racing ladder all the way to the Verizon IndyCar series. We can’t wait to see who the next Shootout winner will be.”

“It’s very challenging for Australian racers to create overseas connections, so we’re pleased to be able to present this opportunity to our best-performing competitor,” Marrinon said.

“Last year, Will Brown received our MRTI prize as the best driver under 25 and he did us proud, making it through to the final six contestants, so there’s no doubt the standard of competition in the Australian Formula Ford Series holds up extremely well compared to similar categories all over the world.”

With one round of the 2017 Australian Formula Ford Series remaining at Phillip Island on 30 September-1 October, four drivers are in mathematical contention for the title and the MRTI Shootout prize – Max Vidau, Cameron Shields, Hunter McElrea and Jayden Ojeda.