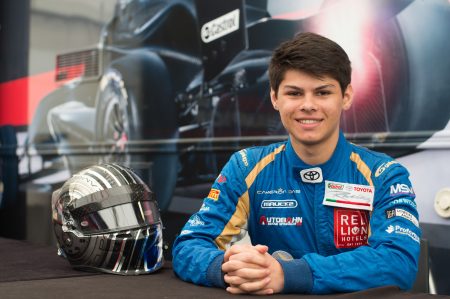 Eighteen year old Baltimore racer Cameron Das has confirmed he is returning for a second shot at the Castrol Toyota Racing Series and the young US driver could be a major factor with both circuit and car knowledge likely to benefit his championship challenge.

Das was a relative late-starter in motorsport, beginning in karting at the age of 14. After gaining his racing licence at the famed Bertil Roos Racing School in the U.S. and catching the eye of many during his first racing season, he became the inaugural champion in the US Formula 4 series in 2016 after dominating the second half of the season. This proved enough to secure a drive with top junior formulae team Carlin Motorsport in the British Formula 3 Championship for 2017.

Carlin includes four-time Formula One world champion Sebastian Vettel and Australian Indycar star Will Power amongst its former drivers and under the team’s guidance Das has been making solid progress in Europe. After finishing 12th overall in the Castrol Toyota Racing Series last season in New Zealand, he finished fifth overall in the EuroFormula championship for Carlin with four podium finishes in a series that included Grand Prix tracks like Monza and Silverstone on its schedule.

A second Castrol Toyota Racing Series championship should see the youngster at the sharp end of a field that has been a key part in the careers of many up and coming international racing drivers over the past 15 years. For the first time in its history, the Kiwi series is also a qualifier for FIA Super Licence points and that’s expected to be a big draw card for even more young drivers targeting the top echelons of global motorsport.

Das – who will be part of the M2 Competition team – is confident about a return to New Zealand, but is in no doubt about how tough it will be to win a championship that F1 drivers Lando Norris and Lance Stroll have won in recent seasons.

“I’m definitely looking forward to returning to New Zealand in January to circuits I know and a car I learned a lot about last season,” he explained. “It’s a very competitive championship; it’s compact, professional and will be superb preparation for what lies ahead in 2019.

“I am also thankful for DidThat.com’s support for making a return to New Zealand possible. Did That’s goal of allowing its customers to ‘Discover the World’s Greatest Experiences’ was a perfect fit for my journey through New Zealand, one of the most beautiful places on earth.”