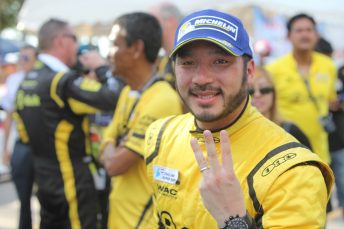 MEDIA RELEASE: B-Quik Racing is pleased to announce that Darryl O’Young will rejoin the team for the 10th Anniversary Bangsaen Grand Prix, 21-26 February; the Hong Kong driver being reunited with our Porsche 997 GT3 Cup for his third shot at the prestigious street race.

Just like the last edition there will be three races for GTM packed into the programme making it a long and tough weekend for the team but with Darryl’s extensive experience of this car and two years of track knowledge together with his unquestioned driving ability he’s an obvious choice to step into the Porsche.

In fact, Darryl has a perfect record at Bangsaen. He joined us for the 2014 edition and won both Super Car GTM races at his first time of asking. For 2015 there were a trio of GTM races squeezed into the programme and Darryl proceeded to bag all three wins. It means he will arrive in Bangsaen next week for the delayed and rescheduled 2016 event having won five races out of five so far and certainly with three more races to come he will no doubt be looking to make it an unprecedented eight wins in a row.

He also has claimed five poles out of five in Bangsaen, another record that he will be attempting to maintain. However, the competitive bar has gone up again this year while the ageing Porsche 997 GT3 Cup continues to standstill so it’s going to be tough to keep the run going.

Darryl’s racing career is exemplary. Most recently he was the GT Asia Series Drivers’ champion, in 2015, while also being a previous double Porsche Carrera Cup Asia Champion (2005 and 2008). Big race highlights include wins in the Bathurst 12 Hour, Sepang 12 Hour and Macau GT Cup, while he’s also finished P2 in class at both the Le Mans 24 Hours and Daytona 24 Hours as well as racking up three seasons in the FIA World Touring Car Championship and one in the FIA World Endurance Championship.

Darryl O’Young (Hong Kong): “I’m really excited to return to the Bangsaen Grand Prix for the third year in a row with B-Quik Racing. The team have given me a perfect car the last two years and we achieved five consecutive pole positions and wins, so the aim for the team is clear to try and extend that streak. The Porsche – Michelin – B-Quik package has proven perfect on the streets of Bangsaen, but the competition is strong and I expect this year to be the most challenging of all. We have worked hard to be well prepared for the race and I have full confidence in B-Quik to give me a great car again. Thanks to Henk and the entire B-Quik team for the opportunity to race in the Thailand Super Series again and I expect great things with the upgraded street circuit.”