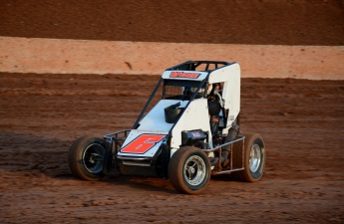 On a night that produced some high quality competition from several racing divisions, the main event saw Darren Vine emerge victorious in round three of the Polar Ice Midget Track Championship. Executing a perfect start from the second row of the grid, Vine took control of the 25-lap feature race from the outset and saw off several challengers on his way to securing his second feature race win for the season. Previous round winner Scott Farmer was great again in finishing second on this occasion, having pounced on a mid-race restart to slip ahead of Vine momentarily, only for the positions to change again before the lap was completed. In a great run through the field after starting on row five, Anthony Chaffey charged home to finish in third spot, relegating pole qualifier Brendan Palmer to fourth ahead of Michael Harders.

In Late Model action, Darren Kane encountered little sustained resistance in his unbeaten run through the heats and feature race. Starting from pole position in the 15-lap finale, Kane had established a sizeable lead after just one circulation and, despite a couple of restarts and a problem late in the race that saw him shed a lot of speed, he still cruised to the chequer to win ahead of Carter Armstrong and Michael Jenner.

A strong 20-car field fronted for the Polar Ice Midget action and it was defending series champion Rusty Whittaker who set the pace in time trials, stopping the clock as 13.664 to set quick time ahead of Palmer (13.6810), Farmer (13.709), Scott Doyle (13.715) and Harders (13.765), while Brock Dean remarkably timed sixth overall after resuming from an incident that saw him tip over in turn three. Reid Mackay, Vine, Chaffey and Brad Young rounded out the top ten.

The racing throughout the heats was sensational and it was Mackay who maxed his points haul in the opening preliminary, leading home Farmer and Whittaker.

Scott Wilson set the early pace in heat two and remained at the front of the field until Vine swept to the front on lap six to take the race. Brendan Palmer finished in third spot, while Adam Wallis, Dan Biner and Brad Young all exited with varying degrees of damage after the latter spun in turn one while running second, although all three would make it back on track for the feature.

Heat three saw a similar scenario unfold as Vine again moved though to assume the lead on lap six, usurping Wallis on this occasion, with Whittaker third.

Palmer powered home to take the final heat, leading home Young and Darren Dillon as Farmer, Mackay and Dean found themselves in strife and failed to go the distance.

The first attempt to get the feature race underway only made it as far as turn one before Dillon upended, while Wallis also exited without completing a lap. At the resumption, Vine gazumped the front row pair of Palmer and Whittaker to emerge with the lead as early as turn two. The race was halted again on lap seven when Dan Biner spun and was collected by Audie Malt, putting both cars out of action. Brad Harrison also failed to make the restart, which only lasted one more lap before Whittaker spun in the same spot, throwing away second spot in the process. Having also moved ahead of Palmer, Farmer charged under Vine when racing resumed but he couldn’t make the pass stick as Vine immediately returned serve and moved back to the front. Chaffey, meanwhile, was surging forward and pounced on Palmer with just three laps remaining to secure a place on the podium. Behind Palmer came Harders and Whittaker, who stormed back through the field, with Dean, Mackay, Wilson and Doyle completing the top ten.

With just eight cars in attendance, Kane was always expected to dominate the Late Model results, but the way in which he went about his work was quite remarkable. In the first heat, Kane clocked a new lap record and a new 8-lap track record on his way to finishing more than 11 seconds clear of runner-up Nick Girdlestone, while third-placed Armstrong was the only other driver to finish on the lead lap.

Aaron Van Zeeland led heat two momentarily but had no answer when Kane pounced at the end of lap two, diving between Van Zeeland and Girdlestone to move from third to first.

In heat three, Kane bided his time behind Armstrong before pouncing with three laps to go for his third win. Armstrong and Van Zeeland filled the minor placings, while Girdlestone’s night ended when he whacked the main straight wall after being squeezed for room by Brett Watson, leaving both drivers on the sidelines for the feature.

With just five cars facing the starter, the feature race was a formality barring some kind of mechanical malady and, even then, Kane still cruised to the chequer with a minimum of fuss. Despite a spin on lap eight, Armstrong annexed second spot ahead of Jenner, Steve Van Zeeland and Aaron Van Zeeland, the latter having inherited second following Armstrong’s error, only to make the same mistake with three laps remaining.

Although down in numbers, each of the AMCA Nationals events produced very close racing for round two of the Shock Absorber Therapy Track Championship. Michael Mason won the opening heat before Russ Hardy prevailed in heats two and three. Come feature race time though, it was Matt Hardy who proved too quick, leading Steve Potts and Russ Hardy to the chequer. Nathan Durston and Tony Blanch were next best, followed by Shane McKinnell, Anthony Joyce and Ricky Sendall.

It was the same story in the Lightning Sprints, with some spirited racing despite low competitor numbers as Aaron Kelly, Jason George and Jeremy Hassall recorded heat wins. Hassall backed up to also win the feature race, downing Australian champ Kurt Wilson and Jason Rae, with Kelly fourth home ahead of Michael Gollagher and George.

In only his second race meeting, Rick Conrad collected two heat wins before taking out the Stockcar feature over Graeme Rangihuna and Mark Strachan.

Sprintcars return to Ausdeck Patios Archerfield Speedway next Saturday night (November 11) for round five of the East Coast Logistics Track Championship, with Formula 500s, Compact Speedcars and Open Sedans also on the program.