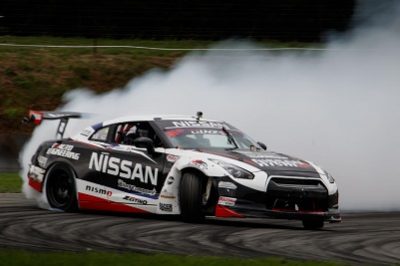 Nissan-backed drifter Darren Kelly overcame one of the wildest events in D1NZ history to take his first win of the 2018 season.

Levels Raceway in Timaru hosted the third round of the Link ECU D1NZ National Drifting Championship where one of the most bizarre incidents curtailed the day’s running.

During the process of retrieving Callum Neeson’s car a recovery vehicle damaged the circuit, which meant the start line and drift section had to be moved.

However, it wasn’t a deterrent for Kelly who overcame the added challenge to take the win. It was the first win in his GT-R, which he said has been a long time coming, since debuting it in late-2016.

“We’ve got the setup dialed in now, I think we’re pretty much on the money with it,” Kelly said.

“The ultimate goal now is to challenge for the championship and get another result like this. With the last two concrete rounds we knew we were going to struggle, but once we got onto the race track it’s just full throttle again.

“We’ll keep doing what we’re doing now and hopefully get back on this top step.”

The top-16 battles were earmarked by one of the biggest upsets of the weekend when Carl Thompson knocked out pole sitter Gaz Whiter. The four-time champion got lost in Thompson’s smoke, which saw him make a mistake out of turn one and go wide into the dirt.

In a repeat of the round two final, Cole Armstrong battled Drew Donovan. Following Armstrong’s solid chase, Donovan made a mistake almost identical to that of Whiter’s. He went wide into turn two and speared off onto the dirt.

Darren Kelly got his first win in the top-16 after Ben Jenkins went off the track at the hairpin. But drama struck for Kelly when his gear shifter broke. He duly called his five-minutes and only made it back out on track with five seconds to spare. After a clean chase he progressed through.

Thompson’s first top-eight berth saw him up against Bruce Tannock. Neither had a mistake-free run, but the judges ruled in favour of Thompson.

The repeats continued for Armstrong, who faced off with van Gisbergen in the top-four. The pair ran door-to-door, but Armstrong was given the win.

The judges deducted points due to van Gisbergen’s shallow line to gain proximity, a severe bobble through the switch, and finally, a dirt drop on the final corner. The judges noted Armstrong went shallow at turn one but was stronger through the second sector especially on the last two clipping zones.

One of the messiest battles saw Kelly and Woolhouse face off. The pair both went wide on entry to turn one and suffered a dirt drop. Woolhouse went shallow through the switch while Kelly aced his line. Woolhouse maintained a good gap but made small errors from thereon. Woolhouse eventually ended with three dirt drops, however, the first fault was attributed to Kelly.

With the top-eight complete, the semifinals were set—Thompson to face Armstrong and Kelly against Wilkinson.

Thompson’s strong run through to the top-four came to an end against Armstrong. He couldn’t keep up with the round two runner-up, who aced his lead line. Thompson suffered a bobble on his chase run too, which resulted in a marking down of his score.

On the other side of the tree, Kelly faced off with Wilkinson in another exciting battle. Wilkinson was close to Kelly in his chase, but that came at the cost of his line, which the judges asked the drivers specifically not to do. Kelly had greater angle too and an early switch by Wilkinson cost him.

Kelly went through and came up against Armstrong in an all RB-powered final, while Wilkinson battled Thompson for third. Thompson made a mistake on his chase run that ultimately cost him his first chance of a podium, while Wilkinson was clean.

In the final, Kelly fought hard to get victory against Armstrong. The pair were close in the two battles, but Armstrong was shallow on his initiation and bobbled at the end. He dived to gain proximity, which resulted in a mark down.

Banging on his door, Armstrong egged Kelly on to stick his nose on the V Energy Skyline’s side. Ultimately it was Kelly who earned the win.

“When I went through the hairpin on my lead I was waving out the window and cheering him on, so he did the same,” Kelly said.

“When we went through there I was right on his door and he started banging on it saying, ‘get up here’.

The Link ECU D1NZ National Drifting Championship moves to Manfeild Circuit Chris Amon for the penultimate round of the calendar on April 20-21. For more information visit D1NZ.com or NZXMS.co.nz.