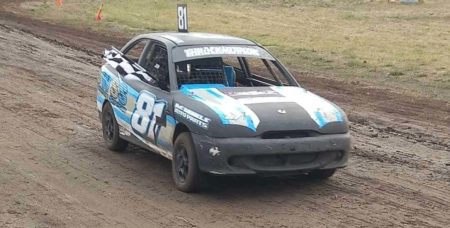 This past Saturday afternoon Mid-Western Speedway situated in Darlington got their condensed 2020/2021 season underway with the Standard Saloons the feature event of the show putting on a terrific event for fans supported by Junior Sedan racing Sports Sedans and Mini Sprints in front of a healthy family crowd keen to see the venue operated by Mortlake Speedway Club underway.

The executive committee and volunteers have been working hard behind the scenes to perform maintenance and upgrades on the facilities and its assets and with a second event scheduled for April the 17th, they look well on their way to further upgrades.

Racing on Saturday night for the Standard Saloons was for the ‘Mortlake 500’ with Brent Clark from Portland and Tim Hutchinson from Geelong the performing strongest in the qualifying races. In the feature race some big crashes including one where Jacob Head and Lachie Chivers cars came together hard and both cars damaged and stuck along the concrete fence and not long after a rollover with Ian Walsh from Ballarat upside on his roof.

Hutchinson who had won three from three in qualifying races went on to lead every lap of the switch and go final with laps in both anti-clockwise then clockwise directions to defeat Patrick Walsh, Brent Clark, Sam Rundell and Austin Chivers.

In the Junior Sedans nationally governed class, New star racer Miller Throckmorton from Colac showed what a star he had the potential to become in future years as he claimed two of the three qualifying race wins before securing a wonderful victory in front of his grandfather and father both former race drivers with great talent. Thockmorton defeated Jake Bradley, Shaqkira Blake, Jackson Annett and Levi Blake.

Arthur Hutchinson nephew to Tim also had a win on race night in the state governed 1200cc Junior Sedan class. Hutchinson won two of the three heat races in the lead up to the final with Jemma Woods the other. Hutchinson proved to be a little two strong for Bryce Leek, Woods, Riley Taylor, and Brock Stephenson.

The most thrilling feature event was in the Sports Sedans where the potential win result changed between turns three and four on the last lap as South West born and raised Daniel Brittain in a brand-new purchase for him picked off Ian Bartlett in the very last turn to win the final. Mortlake Club member Dean Pederson was third with Rhys Flavell the only other finisher in the final. Pederson had earlier won two qualifying races whilst Brittain had threatened to win.

Wrapping up the results was the visiting Mini Sprints one of a couple of classes brought in a short notice prior to the race date. A gentle rollover to Ally Moore ended her race in the final whilst Jason Lynn who won all three of the heat races secured the clean sweep with victory over Rahmon Rivero and Maureen Sell.