Darling 200: The fight to the finish

Darling 200: The fight to the finish 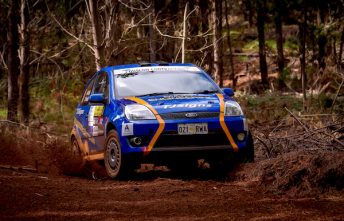 The Darling 200 will take place on Saturday 11 November 2017 in and around Jarrahdale and is the final round of the CAMS Onslow Contracting Western Australian 2WD Rally Championship (WARC) and Clubman Cup and Clubman Masters series.

It’s expected to be a good fight to fill the remaining podium spots with just five points separating Razman Vlad in second place and Andy van Kann in third place in the 2WD Drivers Championship, with Greg Flood trailing by three points in fourth place.

Two stages will be run three times with a service at Jarrahdale Oval after the first and second stages. The total competitive distance is 82 kilometres.

Vlad said he’s looking forward to the Darling 200 after missing the last round due to a broken drive shaft in his MAXYRally 2004 Ford Fiesta.

“If I can’t win the championship, I’m going to try to win the rally. I won last year but Nick Box wasn’t competing then, and he’s pretty fast and hungry for the win so I’ll be going as fast as possible,” Vlad said.

“My focus and joy these days is co-driver development so to be sitting third place in the 2WD Championship is a big surprise,” van Kann said.

“I’m going to relish these next few days because after the Darling 200, its unlikely that I’ll retain third.

“I’m pretty sure Raz will retain second spot and Greg is just behind me on points and way faster than me, as well as being a tough and tactical competitor, so I expect he’ll finish quicker than I will. Still, it’s been a fantastic year.”

Brock Nicoli and co-driver Daniel Adams in their MAXYEngineering 1994 Hyundai Lantra have a 42-point lead ahead of Andrew Percival and Jim Pearce in their True Blue Alarms 1997 Honda Civic. Graeme and Kathy Miles are 24 points behind in third place.

Championship leaders Nicoli/Adams won the previous round Carrington’s Safari and Round 3 in Boddington as well as finishing in second place in the first two rounds and third place in Round 4 the Experts Cup. In Round 5 in Kirup, they rejoined the rally and thus scored half points in fifth place.

Pervical/Pearce are without a rally win this season but have consistently finished in the top five each round.

“To finish first, first we must finish – that’s been our mantra all season,” said Percival.

“At Safari we slowed down to make sure we finished the rally.

“We’re running the team on a shoestring, we’re even running standard struts, so we’re stoked with second this far into the season.

“If things work out in our favour and we win the Championship, that’ll be amazing. But first we have to finish and that’s the aim,” the 48-year-old from Thornlie said.

The question is whether consistency will pay dividends or if drivers who take risks and up the pace will get the win.

Julian Wright has an unbeatable lead in the Clubman Cup Masters and will miss the Darling 200 to compete in the major classic event, the Alpine Rally held every two years in Lakes Entrance in Victoria in early December.

Spectators are welcome and can expect to see the first car at the Jarrahdale spectator point at 12.30pm and the first car is due into service at 1.45pm. More details including a map and directions can be found in the Spectator Guide online.

The WA Rally Championship has three main categories and awards trophies to top finishers in each sub category: