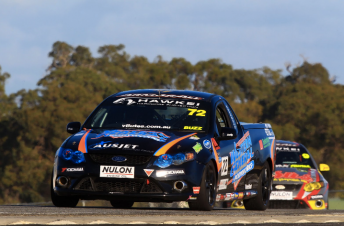 Western General Bodyworks Australian V8 Ute Racing Series driver Danny Buzadzic is aiming for top 15 results in this weekend’s third round of the series at Darwin’s Hidden Valley circuit, one of his favourite circuits.

Buzadzic is also hoping some input from former V8 Ute champ Grant Johnson will lead to an improvement in the performance of his Western General Bodyworks Ford FG Falcon.

“Grant had a drive in my car after the last round at Perth, and he suggested a few tweaks to make it a bit nicer, so I’m hoping this will lead to improvements this weekend,” Buzadzic said.

“The Hidden Valley circuit is one of my favourites, and not just because of the weather. It has a long straight, which gives you a chance to breathe, but Turn 1 is a very hard stop and it’s easy to lock brakes if you’re not careful.

“Apart from Turn 1, there are some other good overtaking opportunities but there are also quite a few corners where it’s easy to run wide and lose positions, especially the hairpin and also the last corner leading back onto the straight.

“Last year, I was having a good run before I got taken out so hopefully I can stay out of the drama this weekend.”

Buzadzic also believes his driving has improved markedly in the last couple of rounds.

“I’m really starting to come to grips with the car, and my gear-changes are spot on all the time now.

As usual, the race format for the Utes will consist of three races, with the second featuring a reverse-grid format. Races 1 and 3 will be shown as part of Channel 7’s V8 Supercar coverage over the weekend.