Dann returns to the Victorian Street Stock Series and wins

Dann returns to the Victorian Street Stock Series and wins 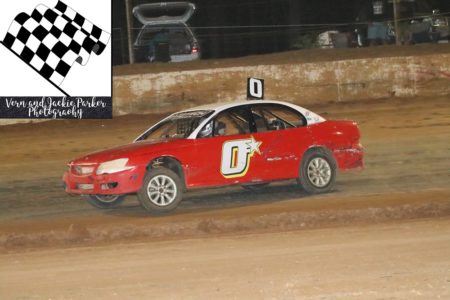 Promotor Justin Hampton and the Victorian Street Stock Series ventured out to the Rushworth Speedway in the Goulburn Valley for the latest round and the running of the Claridge House Removals Grand in the Hand feature event with seventeen racers keen to give the locals a show, and what a show it was with forty grueling laps finishing the night and victory being snaffled by Mick Dann a racer from Melbourne’s Eastern Suburbs.

Six qualifying races determined where drivers would start the final with Zoey Salau winning the first qualifier ahead of Bendigo racer Jamie Lock. South Australian Jason Duell had a win in the second then Andrew Jordan, Lock, Dann and Greg Parks all won heat race action before the all- important Grand in the Hand final with $1000 to the winner.

Earlier in the day race track scrutineers determined that the EB Graphics Best Presented car voucher was won by Salau from the Swan Hill club whilst the PRO 1 Race Parts seventeenth placed award would go to Craig Claridge who had engine troubles and could not start the final at all with all other sixteen starters making it out to complete.

Duell top qualified the family freight company owner stopping at Rushworth on route to Cairns in Queensland then knocked back a prize offer to start at the rear of the field. Lock knocked back the same offer and started alongside in second spot. Nathan Dunn a Bendigo racer also started in third spot with a terrific qualifying run through the night with Tim Hutchinson, Dann and Parks rounding out the top six starters.

Duell led early when the green flag dropped. Hutchinson briefly passed by Lock for second. Dunn and Parks were having a red hot go of things in the top six before Lock took the lead on lap seven with Dann following him past Duell before the first twenty laps finished racing in the clockwise direction. The cars then spun around and headed anti-clockwise for the final twenty laps.

Salau started to make her move forward from tenth spot and Treble who started in thirteenth was seventh as the cars switched direction. Dann took the lead from the first lap of the second half of the race which was lap twenty-one. Treble was in sixth spot at this point with a run still to come for him. With ten to run Salau was seventh and Treble in fourth. Dann still lead Lock and Duell before Treble took third with three laps to run and Salau moved to fifth ahead of Parks with two to go.

In an exciting finish Dann stretched his small margin between he and Lock and as his father and partner looked on after a drought since his last feature win, Dann went on to defeat Lock, Treble, Duell and Salau in the Grand in the Hand.

Dann speaking at the trophy presentation was relieved to have won after a little time between drinks. “The category continues to be the toughest class to win in. So many drivers continue to impress. Look at Nathan Dunn, Greg Parks, Zoe Salau tonight and then Allen Treble came from way back. I enjoy racing with those lads up front and to be in front of them all and go on with it was both enjoyable and a relief. We all have things go wrong on track from time to time, to finally have another win is a reward to all the hard work my dad Steve puts in, thanks Dad for all your time and commitment to our racing.” Shared Dann.

Collecting the twelfth placed finisher Smooth Suspension voucher was Stephen Petrie from the Avalon club and the Claridge House Removals Hard Charger award for the driver that moved forward the most places from where they started went to Allen Treble competing in Lenny Bates race car for a test and tune before the upcoming New South Wales title.

Also in exciting news, Colin Forbes from Forbzy’s Spray Painting drew a winner in his raffle for a VE Commodore Street Stock and the winner was actually at Rushworth Raceway competing. Megan Cheeseman picked up a VE Commodore to park in her garage or try and sell, up to her/ Not bad for a $150 ticket and one in sixty chance.