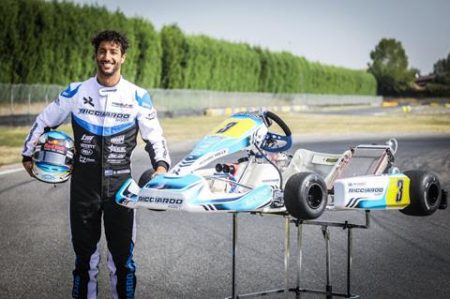 Starting in 2019, a new Cadet 4SS class will see 6-12 year-olds have the opportunity to compete aboard identical karts fitted with low cost and low maintenance four-stroke engines in Karting Australia Club-level competition.

The focus for the youngsters will be on fun, enjoyment and learning driving skills at a young age – traits that Ricciardo remembers vividly from his karting days.

“I’m so excited that Ricciardo Kart has been chosen as the control kart for the Cadet 4SS class in Australia,” said Ricciardo.

“I have some great memories of racing karts as a kid, it’s where my passion for motorsport began.

“Back then it was all about the fun and enjoyment, as long as I was having fun and learning – that was the main thing.

“Over the past decade karting has become technical and the costs have also increased around the world.

Following a tender process over the past few months, Karting Australia today announced the DR-L28 Ricciardo Kart, imported into Australia by Patrizicorse, as the control chassis for the class.

The DR-L28 Ricciardo Kart is the identical kart that is used by the Daniel Ricciardo Series recently launched in England, where the focus is on delivering a fair and competitive racing series and delivered at an affordable and sustainable cost.

The DR-L28 Ricciardo Kart will be available for purchase late in the first quarter of 2019 from kart retailers across the country.