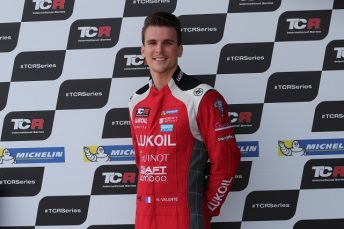 Hugo Valente has decided to retire from professional motorsport and leave Lukoil Craft-Bamboo Racing before this weekend’s round of the championship at the Salzburgring in Austria. Valente was considering his retirement over the winter but was convinced to stay, thanks to the opportunity given to him by Lukoil Craft-Bamboo Racing. Due to some personal reasons, it has been hard for the #7 driver to find the motivation to compete at this level and he has ultimately decided that he would like to step away from the sport, with the team being very supportive of his decision despite losing a big talent. The team wishes Valente all the best in his future endeavors and was pleased that he was able to take some podium finishes during his time in the TCR International Series.

Daniel Lloyd will join Lukoil Craft-Bamboo Racing after having been released from his contract with MG in the British Touring Car Championship. Lloyd makes a great replacement for Valente, thanks to his previous experience with the team and front-wheel drive touring cars. The British driver was instrumental in Craft-Bamboo’s 2015 GT Asia Series drivers’ championship win, having competed in the latter half of the season with Darryl O’Young. Thanks to Lloyd’s familiarity with the crew and engineers, it makes for a great fit and one that should see both the team and the young driver quickly adapt to. It also means there will be minimal disruption to Lukoil Craft-Bamboo Racing’s championship challenge and the team can focus on scoring some solid points for their trio of drivers at the Salzburgring this weekend.

“We are disappointed to be losing Hugo at this stage of the season, as he is one of the most naturally talented drivers I have ever had the pleasure of working with. I tried to convince Hugo to stay until the end of the season but his mind was made up, and I think once you have lost your motivation it is very hard to compete at this level. I am delighted that Daniel Lloyd was on the market at the right time and I am sure that he will be able to win races this year and help the team achieve their goals.”

“I am really excited to be joining Lukoil Craft-Bamboo Racing! The TCR International Series is something that I have wanted to be part of for a while now. It was really ideal to join Lukoil Craft-Bamboo Racing because of my previous relationship with Craft-Bamboo back in 2015. I have got some really good memories of helping to win the GT Asia Series drivers’ championship with Darryl O’Young and I now have a lot of experience in front-wheel drive cars. Although TCR is a little different, I am very happy to be back in the same team and I am really looking forward to getting to Austria to begin my TCR International Series campaign.”

“First of all I’d like to thank Lukoil Craft-Bamboo Racing for giving me this opportunity, everyone in the team does an amazing job and made me feel very much at home in such a short period of time. Unfortunately, the results were not as I expected so I’ve decided to step away from the sport. I have my own family to take care of now, my little girl is nine months old and nothing makes me happier than being with her. I want to give her the same life I’ve been given from my parents and I know that’s nearly impossible to do as a racing driver. It’s been a difficult decision and not taken lightly but I’m ready to turn the page and start doing something new. I’m convinced that it will be the right decision in the long term even though it might give me a little feeling of leaving things “unfinished” at the moment.

I’d like to thank everyone I’ve ever worked with throughout my young career, it’s been a great experience overall and I have met some incredibly passionate people. Racing teaches us values from the youngest age and with those values I believe it’s time to put an end to it and move forward.