Daniel Juncadella: ‘It took a while, but better late than never”

Daniel Juncadella: ‘It took a while, but better late than never” 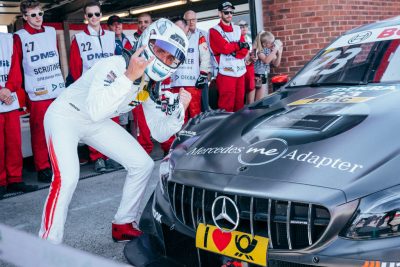 A cycling accident resulting in a injured collarbone is hardly the ideal preparation for the new season. Yet a few months later, the team’s ‘Titanium Man’ was securing a maiden DTM victory. In our interview this week, Daniel Juncadella tells us of his ambitions for the rest of the season.

Stat-Attack – Brands Hatch: The return to Brands Hatch entailed a number of challenges for the DTM teams and drivers: the unfamiliar longer track variant, a change to the timetable with no free practice on Friday, and a venue that was last on the calendar in 2013. The team remained undaunted as it continued its winning streak last weekend. Mercedes-AMG Motorsport has won at least one race on each of the six tracks visited this season, and at Brands Hatch it was both. The haul for the brand with the three-pointed star from the first twelve races of the season has been ten pole positions, eight wins (five of them one-twos) and 21 podiums. The net result from the excursion to England was that the team succeeded in extending its lead in the drivers’, team and manufacturers’ championships.

Eight on the trot: Twelve races, ten pole positions. The team’s qualifying record is impressive, and last Sunday, it set a new record when, for the eighth time in a row, a Mercedes-AMG C 63 DTM started the race from first place on the grid – something that had never been seen before in the DTM. In a run that began on Hungaroring Saturday, every race since has started with a Mercedes-AMG Motorsport DTM driver occupying P1 on the grid. The team has booked at least one pole position on all six tracks from Hockenheim through to Brands Hatch. Gary accounts for most of these (four), followed by Lucas Auer and Daniel Juncadella (two each). Paul Di Resta and Edoardo Mortara have one pole each.

Eleven times in the points: Although Gary Paffett didn’t win either of his two home races, he can feel well satisfied with his start to the second half of the season. With a P6 and a runner-up spot, he continued his run of consistently finishing in the points. After twelve races in 2018, Gary leads the field in terms of pole positions (4), podium appearances (7) and victories (3). He has finished in the Top Ten every time so far this season with the exception of the rain-affected second race at the Hungaroring. The only other contestant to score in 11 of the 12 races is Gary’s team-mate Paul Di Resta. Not surprisingly, Gary leads the drivers’ championship ahead of Paul. There are four more race weekends still to be contested in the current campaign. The next is scheduled for 24th – 26th August at the Misano World Circuit Marco Simoncelli. And as a night race, it will bring its own special challenges.

Success for Mercedes-AMG Customer Sports teams in the USA: In the ninth event of the 2018 Pirelli World Challenge at Utah Motorsports Campus, Mercedes-AMG Customer Sports teams produced several podium finishes. After coming third in the opening race on Saturday, Mike Skeen and Scott Heckert (both USA) went one better in the second 60-minute race to take the runner-up spot. After starting from pole position, Skeen led the race until the driver change. Lone Star Racing team-mate Heckert then re emerged in second, a position which he successfully defended to the finish. David Askew (USA) recorded his first victory for Mercedes-AMG Motorsport in Saturday’s race in the AM classification. A day later, the DXDT Racing man drove the number 63 Mercedes-AMG GT3 to third place and another podium appearance. The Mercedes-AMG GT4 also made a big impression at Utah Motorsport Campus: Matt Fassnacht and Christian Szymczak (both USA) of Murillo Racing, drove the number 34 car to third place in the first 60-minute race. They narrowly missed out on the Top Three in Race 2, finishing fourth.

Podiums for the Mercedes-AMG GT3 and GT4 in China: Both GT models from Affalterbach featured in the Top Three of the GT Masters Asia at the weekend. Melvin Moh (MYS) and Reinhold Renger (GER) steered the number 51 Mercedes-AMG GT3 entered by Customer Sports team Project M to second place. The Mercedes-AMG pairing of Adam Christodoulou (GBR) and Zang Kann (CHN) clinched another top placing for customer team TORO Linky Racing with P4 in the general classification at the Shanghai International Circuit. Yves Volte (GER) and James Tang (CHN) staged a determined pursuit in the number 68 Mercedes-AMG GT4. After a problematic qualifying, the TRC pairing found themselves starting from a lowly 24th on the grid. However, they then put in a flawless performance to take second place in the GT4 class at the end of the 60-minute contest. The second race was cancelled in response to a typhoon warning.

Mercedes-AMG GT4 wins the 24-hour race at Zolder: Selleslagh Racing won the 24-hour race in the Belcar Endurance Championship: Nicolas Vandierendonck, Johan Vannerum, Filip Teunkens and Jean-Luc Behets (all BEL) in the number 30 Mercedes-AMG GT4 completed 762 laps of the Circuit Zolder and beat the runner-up in the GT4 class by a full ten laps. They also registered a creditable sixth place in the general classification. The second Mercedes-AMG GT4 in the field, this time entered by QSR Racing School, also made it through to the end of the endurance test twice around the clock. Jimmy de Breuker, Yannick Hoogaers, Bert Redant and Michiel Verhaeren (all BEL) finished fifth in their class.

Dani, now you’ve had some time to reflect on your maiden DTM victory, how does it feel?
Daniel Juncadella: After a few days, it’s started to sink in, and it’s very nice to think back to the race. It was my first DTM victory – unfortunately it took a while, but better late than never. I am very satisfied with the way the weekend turned out.

It’s been some time since you won a race. Have there been moments in which you began to doubt yourself?
Daniel Juncadella: If you haven’t won a race for such a long time, it gnaws away at your confidence. That can have an effect on your mind, but I started taking a new attitude last year. Since then, I’ve been focusing less on the pure results and more on the progress I’m making. I just take each race as it comes and try to do my best. That way, the results come naturally.