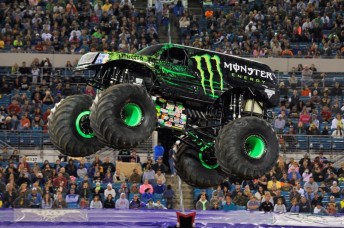 Former American motocross star Damon Bradshaw is a renowned showman, and it’s probably apt that he’s now one of the leading drivers in Monster Jam – the spectacular truck extravaganza that will be playing five shows in Australia between September 27 and October 18 this year.

Bradshaw, 42, sits behind the wheel of ‘Monster Energy,’ one of the custom-built, five-tonne trucks that cost $250,000 each and are powered by octane-injected engines producing up to 2000 horsepower – enough to catapult them from 0-100km/h in less than three seconds.

The Idaho resident finished motorcycle racing in 2001, after winning a clutch of US domestic titles plus the Motocross of Nations – the Olympics of motocross – in 1990 and 1991 riding for America. Six years later, Damon made his Monster Jam debut – and hasn’t looked back since.

“I wanted to continue racing something after motorcycles, but I never really thought it would be freestyle in a Monster Jam truck,” said Bradshaw. “But the opportunity came along, and it’s all about entertaining people. To be honest, Monster Jam probably does that better than any other form of motorsport I’ve been involved in.

“Even in Australia, where we only performed one stand-alone show in Sydney last year, it’s amazing how many fans we actually have. It’s all about entertainment, a big show and a big party, and we allow our fans easy access to us, the drivers, and of course the trucks.”

“In Australia all the drivers and trucks will be top class. It will be our first time in most cities so we’re keen to give the fans a great show. There’ll be lots of tricks, lots of showmanship,” Bradshaw continued.

“There are some drivers in freestyle who aren’t as crazy or don’t have as many screws loose as the next driver, but everybody has their own legion of fans, which is great.

“The freestyle component is certainly tough, so you have to be very creative. I usually go out really late in the order, so the whole time I am watching the show going down. When it’s my turn, I want to do as many things as I possibly can in the allocated time. And for the trucks following me, I want them to be shaking their heads and asking ‘What am I going to do to beat that’?

“But it’s hard to know how the freestyle looks, as you are in the truck and trying to figure out where you are going to land. I try to keep my truck in the air as much as possible, and I try to do combinations that others maybe didn’t think about – and a lot of that comes from racing a motorcycle, or even riding a quad.

“I love to win and always will – I want to be the best at whatever I am doing – but my primary goal is to entertain.”

In addition to Bradshaw in Monster Energy, other star performers during the Australian tour will include Grave Digger®, El Toro Loco®, Max-D℠, Madusa®, Mohawk Warrior® and Monster Mutt Rottweiler®, all with airbrushed logos and creative paintjobs.

Bradshaw’s Monster Jam CV is impressive, and includes Rookie of the Year in 2007 – his first full season – and two years later he won the Monster Jam World FinalsSM Freestyle Championship in Las Vegas.

In motocross, he also rode at warp speed, with many titles to his credit.
“I still catch a bit of racing these days, but most of my spare time is spent on my Harley-Davidson and motocross riding through the mountains of Idaho – it’s magic. However, I struggle to ride at 70 percent – it doesn’t work for me.”

Ticket prices range from $25 for children and $40 for adults. For the Sydney and Melbourne shows contact www.ticketek.com.au/monsterjamor 132 849, and for Adelaide and Brisbane go to www.ticketmaster.com.au/monsterjam or 136 100.

** Indicates shows preceded by the “Party in the Pits” – $15 entry, booked in advance with show ticket. The party in the pits starts at 10:00amin Melbourne and 2:00pm in Adelaide and Sydney.