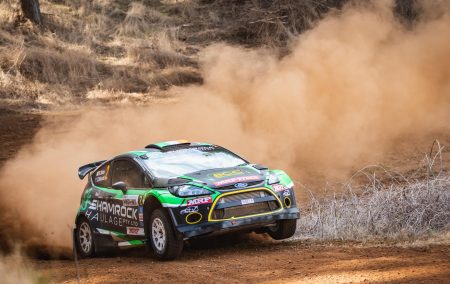 Shamrock Motorsport driver, Richie Dalton, is ready for this weekend’s National Capital Rally, the second round of the 2019 CAMS Australian Rally Championship.

Dalton, an Irishman now living and working in Sydney, and experienced co-driver, Dale Moscatt, are the second seed in the event, after showing strong pace at the opening round in Western Australia.

They’ll again pilot their Ford Fiesta Proto – a purpose-built rally car that started its life in Poland, before being shipped to Australia where it was completed.

After contesting several rounds of last year’s New Zealand Rally Championship in the car, Dalton shipped it home where it has since undergone a complete rebuild by Activ Rallysport in Melbourne.

“We had a slow rollover in WA which caused superficial damage, but that’s now all fixed.”

Dalton had been close to the speed of the factory backed Toyota Yaris AP4 cars of Harry and Lewis Bates, and was on track for a podium finish until his day two accident.

Despite the crash, Dalton says the car is showing plenty of potential.

“We’ve been working on the set-up on the slow speed corners, and have fitted shorter gear ratios,” he added.

“Hopefully we can be a bit closer to the factory cars as we really learned a lot from our first trip to WA.”

The National Capital Rally is the Australian championship’s first one-day rally for many years, with two-day events the norm.

It’s a format that has proven popular with competitors, but also means that drivers won’t have the opportunity to work their way into the event.

“A one-day rally means you have to go flat out from the very first stage,” Dalton said.

“The rally is being held in the Brindabella Ranges outside Canberra – roads that are twisty and technical, and can also be very rough.

“It will be a real challenge to set a fast pace, while also staying out of trouble and ensuring we bring the car home in one piece.”

Aside from the factory Toyotas, Subaru’s Molly Taylor will also be a front runner, as will the Hyundai i20 of Darren Windus, and the Mitsubishi Lancers of Adrian Coppin and Mick Patton.

Fellow Irishman, JJ Hatton, will also be hard to beat in his Hyundai i20.

“This year’s competition is tougher than it’s been for many years,” Dalton said.

“The Bates boys are on home turf, so they’ll be very fast. If we have a clean run, however, we’re confident that we can push for a podium finish.”

The National Capital Rally will be held over eight stages on Saturday, May 11, with a total competitive distance of 144 kilometres.

The longest stage is the 27km Sherwood test, which will be run twice.