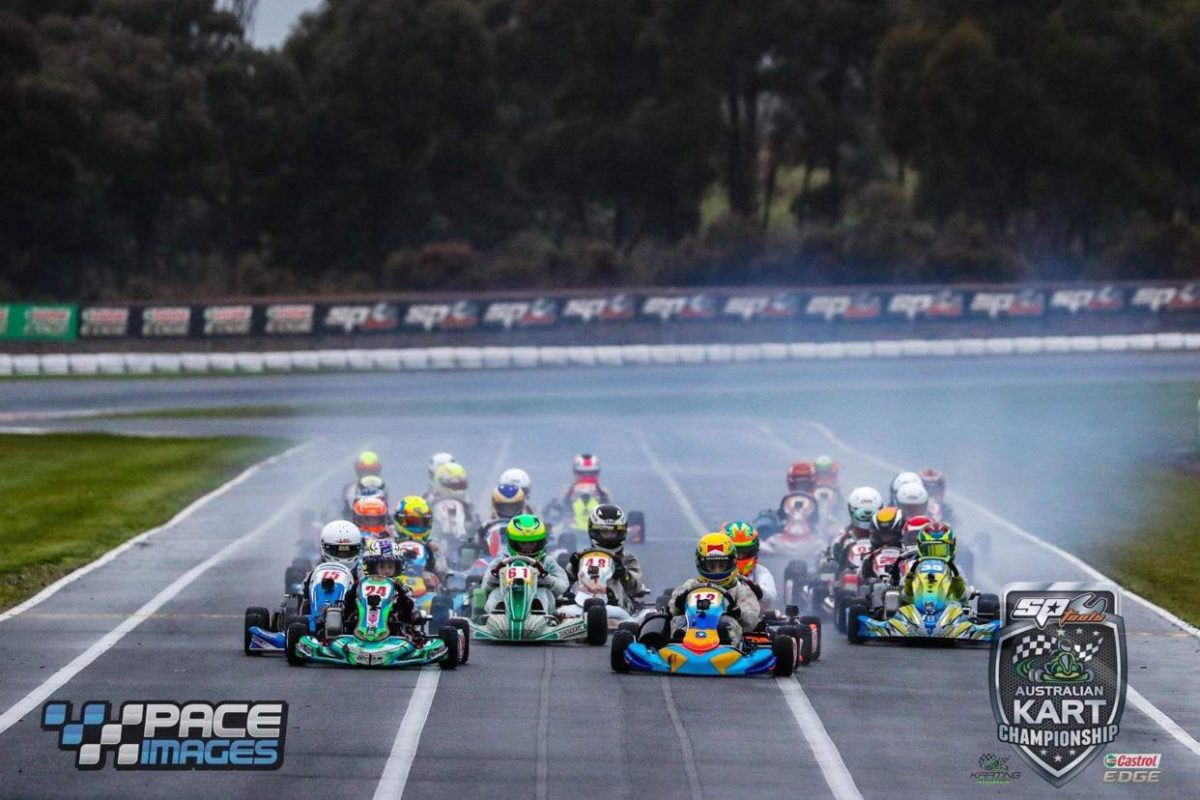 Ayrton Dalmaso returned to Victoria for round three of the SP Tools Australian Kart Championship at the Eastern Lions Kart Club. Dalmaso has been a regular front runner of the championship so far and was looking to continue this. Ayrton racing in the oversubscribed near fifty kart field of Cadet 12 drivers. Dalmaso under the Tom Williamson Motorsport banner and powered by A1 Engines was ready to go racing.

Dalmaso used Friday practice to fine tune the kart and this had himself in the upper fifty percent for Friday afternoon qualifying. The Tom Williamson Motorsport team driver made his way immediately into the top ten and was pushing the top five. Ayrton put a stunning lap in to put himself up on the front row but was pushing to try and improve and go one spot better. Dalmaso qualified in second position overall and had him confident for his heat racing.

The rain had arrived over night and Ayrton’s open heat was under tricky wet conditions. The A1 Engines Motorsport powered entry settled into the lead on the opening lap but was quickly in a battle for the top three spots. Ayrton dropped down as low as fourth in the front group battle but continued to push and try and get himself back up the field. Dalmaso did a terrific job to come home in position three overall in a great start to his racing.

Heat two was a tough affair for Dalmaso. The young driver was off the front row of the grid but was pushed out on the opening lap and was out of contention. Due to his heat two DNF, Ayrton was outside the top ten for heat three. The Tom Williamson Motorsport driver got an excellent start, bursting into the top ten and pushing hard to challenge for the top five. Dalmaso made his way up to sixth position in a great recovery from his second heat and this had him filled with confidence going into the remaining two races.

Dalmaso was once again well outside the top ten in heat three but got an excellent start moving up to position thirteen on the opening lap. The A1 Engines Motorsport powered entry continued to push hard and try and make up as many positions as possible as the race went on. Ayrton made his way into the top ten and continued to push hard and go for positions. Dalmaso was able to cross the line in position nine overall, having him out of position thirteen for the combined final.

The final came around and the track was drying so the team elected to put slick tyres on. The rain started to fall just before the gate open and Ayrton had no choice but to go out on slick tyres. The Tom Williamson Motorsport driver dropped towards the edge of the top twenty. With a never say die attitude, the young driver didn’t give up and was able to come home in a credible position sixteen overall.

Ayrton’s parent spoke post weekend of their young drivers ups and downs. “As always super proud of Ayrton and so impressed with his qualifying result, unfortunately the choice of slicks in the final didn’t pay off”. Dalmaso will now join the junior ranks for the remainder of the season and will be a driver to watch on his move up in class!