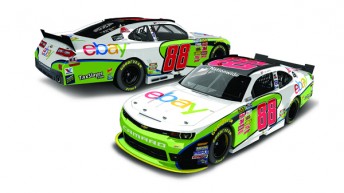 Dale Earnhardt Jr. announced today a partnership with eBay that will pair NASCAR’s 11-time Most Popular Driver with one of the world’s largest online marketplaces.

The extensive partnership consists of several facets that will engage eBay’s community of automotive enthusiasts and include charitable initiatives with The Dale Jr. Foundation.

“We believe fans will relate to the excitement Dale Jr. feels toward the sport on and off the track,” said Bryan Murphy, Head of eBay Motors. “We are looking forward to helping auto enthusiasts connect with the things they need and love on eBay the same way Dale Jr. does.”

“As most people are aware, I’ve been obsessed with eBay for the past few years because I do a lot of shopping for vintage racing stuff,” said Earnhardt Jr. “It’s a great place to find all the things you need and love. And eBay Garage is especially cool because it’s an online community for car enthusiasts. I have a profile set up already so you can see what’s in my garage. I’m looking forward to seeing what other people have in theirs.”