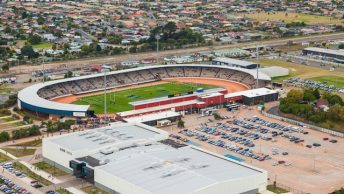 MEDIA RELEASE: The Demon Energy D1NZ National Drifting Championship will make New Zealand motor racing history for the second time this season, as the series undertakes another stadium based event in the space of three months.

Tauranga’s ASB Baypark Stadium is set to be transformed into a drift circuit over February 24-25; in similar fashion to Dunedin’s Forsyth Barr Stadium in December of 2016.

It will be the first time a North Island stadium houses D1NZ – and only the second time in Southern Hemisphere history – following the Dunedin drift event. 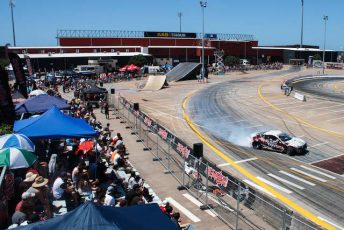 The 17,000-plus capacity multi-purpose facility is usually home to speedway, rugby, sprint boats, and concerts. However, 5000 square metres of concrete will be laid atop the grass infield to form a drift circuit.

D1NZ Category Manager, Brendon White said the move towards stadium based events will give fans the closest possible drifting experience. With a global trend towards speedway and stadium based motorsport events, the series is looking to take D1NZ to the masses.

“This is another New Zealand first, and to grow the sport with our long term plans made more sense to make the move this year than the following season,” said White.

“The existing infrastructure at Baypark means the costs associated with converting a blank canvas, like the car park or Forsyth Barr Stadium, are not present. So we can focus 100 per cent on making an amazing show for fans, sponsors, and driver that this track layout will offer 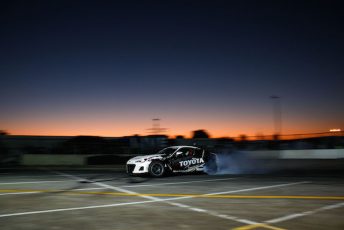 Michael Prosenik at sunset during 2016’s D1NZ event at Taurangas

“Some will walk away broken but one things for sure it will offer some of the best drifting ever witnessed in the country.”

The move to inside the stadium assures fans the added luxury of covered seating, big screens, all the amenities the existing motorsport set up the arena offers.

Round one winner at Dunedin’s Forsyth Barr Stadium, Cole Armstrong, said the opportunity to compete inside the stadium of his hometown is one he’ll be looking forward to.

“For D1NZ to place a track in our home town in Baypark Stadium here is so awesome,” said Armstrong.

“We’ve had it three years here, and to step it up, and to create something awesome like Nitro Circus—It’s next level!”

Fellow Tauranga drifter Dave Steedman said he’s excited to bring the action inside the stadium, especially given his recent form in the series.

“Tauranga is such a motorsport enthusiast capital,” said Steedman.

“It’s going to be fantastic to have D1NZ inside the stadium. All of the fans are going to come out and just fill these seats.

“I’m feeling really good after round two, I had really good seat time, got used to the car, and came away with the win. I’m super pumped to come back to Baypark and try and get on that podium again.”

In years past, the car park adjacent to Baypark Stadium was used at the drift circuit. The area will again be utilised in February, forming a car show, trade area, beer gardens, and action sport arena. With a big screen tv setup outside, no one will miss a second of the action from inside the stadium.

“This stadium has been purpose built for speed events, not only speedway,” said Dawson.

“As we’ve demonstrated already we’ve had jetsprints, Nitro Circus, we’ve had rallycross, and now to get drifting it really just enhances its reputation as an adrenaline speed venue in the Southern Hemisphere.

The third round of the Demon Energy D1NZ National Drifting Championship takes place over February 24-25, with tickets available on the gate or through iTicket.co.nz.