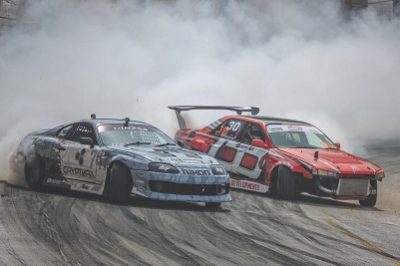 The Link ECU D1NZ National Drifting Championship will return to the South Island this year with its first visit to Timaru in over a decade.

The country’s leading drifting series will be joined by Drift South, a series solely based in the South Island. It’ll be the fourth round for them and round three of the D1NZ calendar come March 9-10.

The last time D1NZ ventured to Timaru was in 2007. The round was won by Carl Ruiterman, who went on to win the Drift King title later that year.

The Pukekohe local, who runs vehicle modifications outfit E&H Motors, said the level of competition has developed dramatically over the last decade.

“The cars have definitely moved a long way,” he said.

“Back then we were running a street tyre, now they’re running semi-slicks. Back then you could easily compete on 450hp, but now the cars you see today are up around 1000hp. Things have come a long way.

“I remember it being quite a tyre hungry track. So, it’ll be really interesting to see how the guys go this weekend. I’d say they need to be prepared with quite a few tyres.”

That year the field was dominated by the Nissan Silvia chassis’, but fans will be treated to a wide variety of cars 11 years later. The series is now host to BMW, Ford, Holden, Toyota, and even a factory-backed GT-R from Nissan as well as the humble Silvias and Skylines.

Ruiterman remembers the track being one of the hardest on the calendar with a drift section like none other in the country. Still in the 11 years since the series ventured to the circuit no circuit comes close in design with it’s wide open entry and tight second sector.

“The circuit is quite technical. You have to get the line right for it to flow properly, especially in a low powered car. It was a really good challenge, I actually really enjoyed Timaru.

“It was a cool atmosphere when we went there. I reckon it’ll be really cool going back there again.”

11 years on he’s still heavily involved in the drift scene, but in a different role as a judge for the series.

“It’s hard for a driver because when I watch it I just want to race. It’s really good giving feedback to the guys that want it and ask you where they can improve.”

The return to Timaru also marks a significant moment for one driver. Gaz Whiter is one of very few who raced in 2007 who still competes to this day. While ‘Fanga’ Dan Woolhouse did compete in the same era, he didn’t compete in Timaru.

Whiter comes to Timaru the sole driver remaining who last competed at the first event. Ever since he started competing in D1NZ he has always competed in a Nissan Silvia S14.

Over the years the numerous Silvia’s he’s driven have changed their guise, but the chassis stays the same. Then he was running six-cylinder RB20DET, but now he’s piloting a Smartcookie8-backed V8-powered S14.

When the series hits the track on Friday it’ll be a new kind of drifting never seen before for the Timaru locals. D1NZ Category manager Brendon White said the atmosphere will be totally different.

“10 years ago, most of these guys were running at 450hp and that was the best of the best,” White said.

“The speeds are up, the proximity is closer, and best of all, the battles have gone to another level. When the spectators arrive at the circuit they’ll have not experienced drifting like these before.

“It’s also cool to be able to return to what is one of New Zealand’s oldest circuits, which means it’s got a real old school feel about it with plenty of fast open turn and corners with a bit of camber.