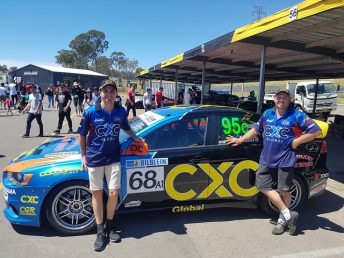 When CXC Global Racing heads to Mount Panorama this week for the Hi-Tec Oils Bathurst 6 Hour – which doubles as round one of the 2017 APC across April 14-16 – they will do so with no less than four Class A entries.

The team – driven by CGR Performance – will run three of its Mitsubishi Evo IXs for Jacob Andrews and Mark Griffith (#65), team principal Dylan Thomas and Supercar driver Tim Slade (#68) and Neale Muston and Peter Paddon (#85). It will also campaign a Mitsubishi Evo X for customers Andrew Richmond and Karl Reindler (#46).

“The performance workshop CGR Performance is the brains behind CXC Global Racing, and we are very excited about our plans for the 2017 Hi-Tec Oils Bathurst 6 Hour,” explained team and CGR Performance principal Dylan Thomas.

“This is easily the biggest event of the year for both our performance and race car prep business – which looks after a wide range of cars in various categories year-round – and the race team. As far as a promotional piece for our business and what we can do, it doesn’t get any bigger than the Mountain.

“Our cars are usually at the front of any category we run, and we are certainly looking to make sure that the Hi-Tec Oils Bathurst 6 Hour is no different. The preparation has been intense, all cars and drivers have been shaken down, and no stone has been left unturned as we look for a good showing at this event.

“With four entries being run out of our workshop in this year’s event and some good steerers at the wheel, we are confident of some great results for the team, and for our supporters CXC Global, CGR Performance, and Barrenjoey Smash Repairs.”

Amongst that driver line-up are respected racers from the ranks of Supercars, production cars, Radicals, GTs and more.

“In the number 46 we have customers Andrew Richmond and Karl Reindler. Reindler is a former Supercar driver and current co-driver, while Richmond is a seasoned campaigner with plenty of miles around the Mountain in GTs. In an Evo X, they will be a pretty strong contender for the outright win,” explained Thomas.

“In the #65 Mitsubishi Evo IX we will have Jacob Andrews, who has moved up through our lease programs over the years from Formula Vee through to Production Cars. This will be his first time at Bathurst and so he will be looking to make it to the end first and foremost, but with a pretty good car underneath him anything could happen.

“Andrews will be teaming up with GT racer Griffith, who has replaced Duncan Handley who has decided to buy a house and as such, had to divert his racing budget.

“In the #68 Evo IX I will be joining up with none other than Supercar star Tim Slade. We are certainly hoping to be outright contenders, especially as we have undertaken some development on our car to hopefully deliver some quicker pace around the Mountain this year. Having said that, there are a couple of cars around with some very good pace – one particular BMW for instance, and also the Mercedes AMG A5 will be fast. It will be interesting to see how the race pans out, that is for sure!

“Finally, in the #83 Mitsubishi Evo IX we will have Neale Muston and Peter Paddon.  Both compete in the Radical championship while Muston regularly competes in everything from Porsches to Radical to LMP3s overseas. With a lot of seat time at a lot of tracks, I expect him to be competitive. Paddon meanwhile has just completed the 12 hour at the Mountain in a Ginetta and undertook double-duty that weekend in the Radical Championship, so he has plenty of recent experience around this place under his belt – both guys will be very quick and I would be expecting them to be a definite podium possibility.”

When it comes to looking ahead for the rest of the APC season ahead, Thomas says the CXC Global Racing team may make further appearances across the year.

“We have been racing Production Cars for a long-time now, and this year we are looking to run in the Toyota 86 Series as something different and a way to showcase our range as a performance workshop and race car prep shop,” Thomas explained.

“Having said that, we may pop up at an event here and there – so stay tuned!”

The four CXC Global Racing-run entries will be part of a 66-car strong entry list for the Hi-Tec Oils Bathurst 6 Hour.

To be held across April 14-16, the event doubles as the first round of a six-event calendar for the 2017 Australian Production Cars season.