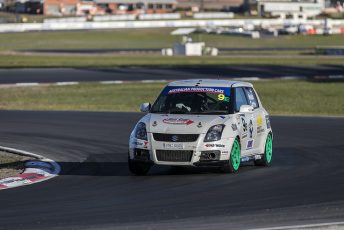 Paul Currie will make his return to the Australian Production Cars after a hiatus for next weekend’s fifth round of the series, to be held at the Phillip Island Grand Prix Circuit (September 8-10).

He will be joined in the Hurley’s Smash Repairs/Angelside Racing and Mechanical Services Suzuki Swift Sport by regular co-driver Jason Walsh, who temporarily stepped across to the Hankook Australia Kia Pro-Ceed entry run by Terry Conroy at Sydney Motorsport Park’s round three before sitting out round four at Queensland Raceway.

The event will signal a return for the pair to the track which hosted the debut of their racing partnership at round one of the APC last year.

“We have developed the car a long way since last year’s round one, mainly with adjustments and with the tuning of the chassis to the point where it is now a very easy car to drive,” said Currie, who thanked Hurley’s Smash Repairs, Angleside Racing and Mechanical Services, Bass Straight Removals, King Springs, Repco and Wangaratta Engineering for their support.

“We were hoping to have a new engine for this weekend but unfortunately we are not quite there yet, as we are having to source most of the parts from Japan mainly due to the reliability of the engines as a road car and the fact the engine internals are not something which seems to be stocked locally either genuine or aftermarket.

“We hope it won’t be too much longer though, as we have the parts now and are just waiting on machine work to be completed before we can assemble and run it on the dyno.”

While Currie missed the APC’s third and fourth rounds of the year, it has done nothing to dampen his enthusiasm for the series.

“The lead-up to round three was a bit event-filled for myself with some health issues that needed attending to after I entered for the event. We were planning to race with our good mates Kingy (Mark King) and Anton (Anton Mechtler) but it turned out that I was admitted to hospital and therefore was unable to prepare the car or attend the round, so instead Jason paired up with Kingy to pilot the Kia, assisting in the development of what looks to be a very exciting car.

“While I was on the road back to health ahead of Queensland Raceway, that round was unfortunately out for both Jason and I due to prior commitments.

“With the time out of the seat, I have been itching to get back into it so I am very excited to be getting back in the saddle for round five at Phillip Island.

“The Phillip Island Grand Prix circuit is one of the most exciting tracks to race on in the country, so what better place to make a comeback than there? Jason and I can’t wait to see what we can do next weekend.”

While its drivers may have had some time-out, the Hurley’s Smash Repairs/Angelside Racing and Mechanical Services Suzuki Swift Sport has been undergoing a busy preparation schedule ready for next weekend.

“The car performed very well in the last round we ran (round two at Winton Motor Raceway), securing eighth outright in race one and winning Class E in both races. That is one good thing about these little cars, they are so solid and reliable,” Currie said.

“We started the preparation just before the SMP round, but since packed it away waiting for when we could take her out again. Now, it is back on the hoist and getting a thorough check over, new brake fluid and achage of pads ready for Phillip Island.

“The last time Jason and I headed to Phillip Island it was the first time we had teamed up behind the wheel and we also had double duties to worry about, as we were assisting the Naylor brothers Leigh and Mitch in their Swift as well as racing our own.

“This time, we will be able to completely focus on our car and our driving, with new Team Manager Stephen Whyte coming to look after everything else.

“We are really looking forward to it, especially since the last time I was in a car at Phillip Island the weather turned bad and I ended up going backwards through turn one before handing the car over to Jase who spent the last hour of the race with the car vibrating like he was driving over a cattle grid – and he still brought it home in second place!

“The car will be strong in pit lane – no one will be able to get us there – and I am looking forward to seeing how the car handles through the southern loop following the development it has gone through since we were there last.

“I also expect that we should be strong through the ‘Honda’ Corner to ‘Siberia’ sections of the track, and a lot better through ‘MG’ corner as well. As far as the straights and ‘Hayshed’ go, it will be a matter of holding our lines and being predictable for the faster cars, as in those parts of the track the speed differential is quite substantial so we have to drive as much in our mirrors as we can while dealing with what is ahead on the road.

“Phillip Island is always an awesome place to race. Our goal is to finish of course, that is number one. At the end of the day it is a four-hour race and unless you are still going at the end it doesn’t matter how fast your car is! After that our priority is to have fun and enjoy ourselves – both on and off the track. There are awesome people you meet in the paddock who are all there for the same reason we are, and that is the love of the sport.”

Currie and Walsh and the rest of the Australian Production Cars field will take to the Phillip Island Grand Prix circuit next weekend (September8-10) for what is the penultimate round of the 2017 APC season.