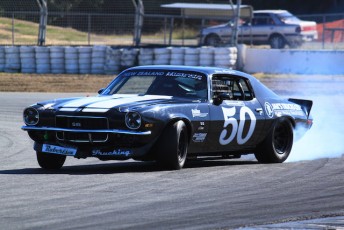 MEDIA RELEASE: New Zealand Historic Muscle Cars competitor Glenn Allingham is set to join a maximum capacity grid at round four of the Australian Trans-Am series at Lakeside Park, for the Lakeside Classic meeting on July 16 and 17.

The Kiwi who flamboyantly drove his 1970 Chevrolet Camaro SS in the 2015 Trans-Tasman Challenge will take the wheel of a 1967 Ford Mustang owned by Category Director John English in the 21-car field as he returns to the Logan Village Smash Repairs Pontiac Firebird.

“I’m looking forward to the great historic Lakeside Classic meeting this weekend, will try to round up a couple of the Aussies,” said Allingham.

Charlie O’Brien and his nephew Shannon O’Brien dominated the series’ previous outing at the Shannons 2 Days of Thunder, sharing the honours with two wins a piece.

The fast and flowing 2.411km circuit has been a happy hunting ground for the Australian Touring Car Championship veteran with the current points leader having won the last eleven races in a row at the historic venue.

Sean English in the MPP Race Fabrication/Discount 4X4 Mustang aims to preserve his lead in the Mulch Smart 5 Litre Classics ahead of the dominant Rob Hackwood who clean swept the previous round at Queensland Raceway in the Wellpro/Mustang Auto Parts Mustang.

The 5 Litre ranks will be bolstered by the return of Mark Bowtell in his 1968 Pontiac Firebird.

The conclusion of racing at Queensland Raceway saw 2015 champion Charlie O’Brien (288 points) continue to extend his lead in the Palmer Steel Industries Trophy Class ahead of Brett Curran (225) and Shannon O’Brien in third (207). Alwyn Bishop leads the Loaders ‘R’ Us Sportsman Class (288) ahead of Harry Charalambous (161) and Martin O’Kane (157) while defending 5 Litre champion Sean English (267) leads the Mulch Smart 5 Litre Classics ahead of Rob Hackwood (226) and Tricia Chant (168) heading into round four, which marks the half way point in the championship.