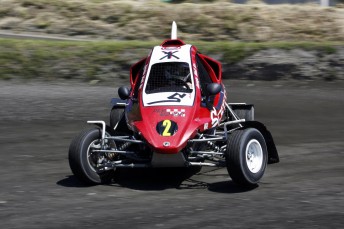 Motorsport royalty that all have one brand of car in common that few Australians will have ever heard of until now: Lahoz.

An Asia-Pacific wide distribution deal with Industrias Lahoz of Barcelona was announced today that will provide a valuable avenue for Australian drivers to dip their toes in the water of high-level rallycross competition.

Adam Hammond of Bluetech Financing Solutions was happy to be able to finally announce a deal.

“I’ve been in discussions with Delfin and Marlene Lahoz since seeing their industry-leading crosskarts run while I was living in Europe”, Hammond said.

Crosskarts are huge in Scandinavia and Spain and are rapidly expanding around the world due to the increased interest in rallycross as a platform.

Using commonly available 600-1000cc motorcycle engines and 2WD, they are uncomplicated to work on, easy to transport, and provide the opportunity for sponsorship support from motorcycle OEMs and associated businesses. 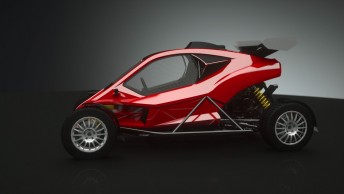 “With top of the range brakes and Öhlins TTX suspension they stop and corner incredibly well.

A 150hp GSX-R 750cc engine already has the car right on the knocker of the magic 500hp/tonne figure”, he continued.

The 0-100kph dash is dispatched in around three seconds and the cars post only slightly slower lap times to the 4WD rallycross cars thanks to a weight of only 312kg.

“The two recently announced rallycross series in Australia will be fantastic for motorsport in the region”, Hammond said.

A factory prepared R3 class (2WD) Toyota GT86, Citroen DS3, or Renault Clio rally car costs in the region of €80-90,000 for the car only, while the 4WD classes are substantially more expensive.

A crosskart however can be purchased for under $40,000 (Australian).

“That process highlighted the need to include an option that delivers the performance to keep drivers and the spectators happy- at a price that doesn’t scare anyone away from getting into racing”, he continued.

With a career start in sales and marketing with Porsche in Australia, Hammond is a huge fan of rally legend Walter Röhrl who once famously said: “Good drivers have dead flies on the side windows”.

“Learning to drive sideways competitively takes some practice so it’s nice to be able to do it in something that won’t break the bank if you have a momentary lapse in talent”, Hammond smiled.

Crosskarts also allow for an early start in the sport of driving sideways. 12-18 year old juniors in the Spanish series run rev-limited 600cc crosskarts so that the limiter can be removed once they graduate to senior leagues.

In Scandinavia that transition is normally made at 16.

Far from being only for grass-roots and junior racers however, crosskarts are used for training purposes by the likes of this year’s (successive) Dakar winner Nasser Al-Attiyah, and Team Peugeot Total factory driver Cyril Despres who has won the bike class in the event five times.

“A lot of riders use trials bikes to hone their throttle, clutch, and brake control whereas the smart drivers are using crosskarts to practice driving in low-grip situations”, Hammond said.

Al-Attiyah is the crosskart distributor for the Middle East region, Mikko Hirvonen handles Finland, while Carlos Sainz is a regular at the Lahoz test area just outside Barcelona.

“Drivers of that caliber constantly providing feedback to Lahoz over many years have been invaluable on the development front and we can confidently offer the Australian and Asia-Pacific markets a very polished product”, said Hammond.

Outside of the 600-750cc Xtrem crosskart model, Lahoz offers a 1000cc hillclimb car with many European class wins under its belt, and the TTX: a 1.3L crosskart with 250+hp and 4WD set to make its world retail debut later in 2015.