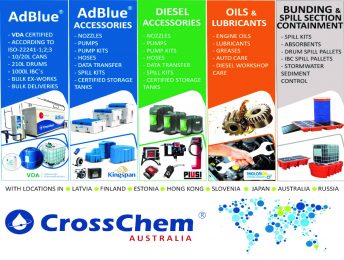 MEDIA RELEASE: Motor sport has attracted another sponsor with CrossChem Australia – for the first time ever – backing a team in the Touring Car Masters at this year’s Bathurst 1000 weekend.

CrossChem Australia is a privately owned company which supplies a range of products across the nation to the truck and coach industries – VDA-certified AdBlue, AdBlue and diesel bulk tanks, AdBlue and diesel dispensing equipment, spill kits. It is also a distributor of Anglomoil lubricants.

This weekend the CCA logo will be seen for the first time on a TCM car: the Valiant Pacer of veteran racer Cameron Tilley. Cameron is the current ProAm Champion and ordinarily his 6-pack Pacer is the only non-V8 in the field however this year the NZ contingent have come across to join us for a gigantic grid of 54 cars! So, he will be one of a handful of Valiants looking to mix it with the big capacity engines.

Cameron will race three times on the 6.2km long circuit which is unusual for having a steep 174m climb from Pit Straight up to Skyline and back down again through The Esses.