Camden-based racer Cameron Crick left Round 3 of the Porsche Michelin GT3 Cup Challenge ruing small errors throughout the weekend that cost the Garth Walden Racing entry the chance to push for a greater points haul. The 21-year old would ultimately finish the round 6th overall, in what was a consistent albeit frustrating showing for Crick. 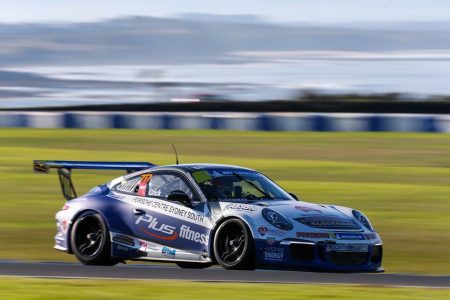 Entering the weekend without having tested at the famous venue, Crick would finish 7th on the timesheet in both practice sessions, still adjusting to the track. Crick would find himself in a greater rhythm at the start of Qualifying, before an unfortunate error on his 5th lap which saw the talented speedster parked in the gravel trap – and red-flagged out of the session. This crucially denied Crick the chance to continue growing accustomed to the circuit, as well as the obvious issue of starting further up the grid. Crick’s time would be good enough for 6th, in the first of many cases of ‘what could have been’ for the weekend.

Despite losing several spots in the early tussles of Race 1, Crick worked his way back to 6th by the time he crossed the chequered flag. Backing up for the Jim Richards Endurance trophy in Race 2, Crick was in a solid position to again finish in the pointy end, placed 5th around the halfway point of the race, with 6th position well back in the distance. A safety car would bring the field together again, and upon the restart a fierce battle resumed between the front end of the field. Crick found himself in 4th position briefly, however would soon be forced back to 6th in the face of unrelenting pressure from a large battle pack hot on his tail, a position he maintained until the end of the race.

With hopes of breaking into the top-3 for the final race, Crick set out in an aggressive mindset for Race 3, however his final race of the weekend was spoiled when the Plus Fitness Racing #777 entry spun after making contact with another car at MG Corner on the first lap. Dropping back to 21st, Crick would grit his teeth and claw back to 8th by the end of the 12-lap race. This result left Crick 6th in the points for the round, and 8th overall in the championship standings, in spite of some costly errors at key points of the weekend.

“I think not testing (at Phillip Island) certainly hurt us, however with time and money constraints on myself and the team it just wasn’t possible. We will still walk away 6th for the round and you’d probably take that at the start of the weekend, although we’ll be doing everything we can to find those extra tenths in both myself and the car for the next round in Ipswich”, Crick stated.