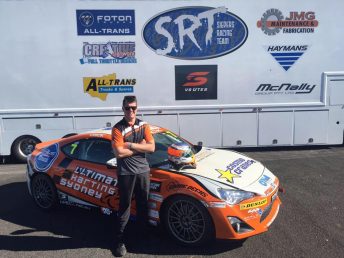 MEDIA RELEASE: The 2016 season will come to a conclusion this weekend for Cameron Crick in the Toyota 86 Race Series, and he is looking forward tackling the streets of the Sydney Olympic Park as part of the Sydney 500 Supercar event.

In what has been a mixed year throughout this year’s five-round inaugural Toyota 86 Race Series, the 18-year-old racer from Camden in NSW regards the Sydney 500 as his home event, which is extra motivation to finish the year on a high.

“I’m looking forward to racing in Sydney for the first time, because it’s an opportunity to race in front of all of my family and friends, as well as my valued sponsors,” enthused Crick, who is currently positioned 13th in the Toyota 86 Race Series point standings.

“In terms of results, I’ve been a consistent top-10 contender this year, so I’m looking to continue that form and come away with consistent top 10 finishes. That being said, with a quality field of 30 plus cars, it’s going to be tough but I’m ready to tackle the challenge.”

After a crash in the previous round back in October at Mount Panorama in Bathurst, the # 7 Ultimate Karting Sydney backed Toyota 86 driver and his team have put in a lot of hard work to repair the crash damage and recently took part in a practice run at Goulburn’s Wakefield Park Raceway.

“My team has put in a lot of hard work to repair the damage from the Bathurst crash, but we’re very happy with the work that has been completed,” Crick commented.

“Our practice run at Wakefield Park was a very productive one and we were able to do a shakedown of the rebuilt car, so we’re now good to go for the Sydney 500 event.”

For Crick, the Sydney 500 will be the first time in his short motorsport career where he is going to compete on a street circuit.

“The key to the weekend is having a strong run in practice and then building on that in qualifying, because it goes a long way towards either making or breaking your weekend,” he said in regards to competing on the 3.4 kilometre street circuit.

“It’s exciting tackling a street circuit for the first time and the challenge that it’s going to bring. There’s no doubt that running strongly from the get-go is going to help me qualify towards the front of the field and then achieving my objectives for the weekend.”

The Sydney 500 format is going to see both a practice and qualifying session on Friday, followed by the opening two races on Saturday and then the third and final race on Sunday.

Every one of Toyota 86 Race Series events will be televised LIVE on Foxtel Channel 5.