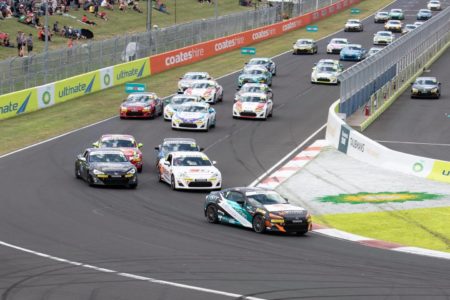 Camden-based racer Cameron Crick has celebrated his return to a full-time drive in the Toyota Gazoo 86 Racing Series with 3 victories in 3 races, making for a dominant weekend of racing.

Coming off the back of a tumultuous 2020 which decimated the Australian Motorsport calendar, Crick elected to return to his roots for the 2021 season. Teaming up once again with the Sieders Racing Team, Crick brings strong pedigree to the category which he started his Motorsport career in, as part of a 3 year run which was punctuated with a 3rd-place championship finish in 2018.

In a delayed start to the weekend, with the first practice session cancelled due to heavy fog engulfing the famous venue, the 23-year old topped the time sheets from the outset, completing Practice 2 with the fastest time in the field. A yellow flag after just 1 qualifying lap threatened to derail Crick’s impressive start to the weekend, however some quick work from track officials allowed the field to complete 2 flying laps, enough time for Crick to secure pole position in Race 1.

“It was a shame with Practice 1 being scrapped, because it’s such a unique track and you do need to work your way into the weekend, getting back into the groove every time”, Crick explained, “but I’ve driven enough here to still feel confident and even in qually when we weren’t sure we’d get the full run we did enough to make it count and put us on pole for Race 1.”

Crick would put his pole position to good use, as his rapid jump off the start line gave him space to build a healthy lead, which he held for the entirety of Race 1 in spite of some pressure applied from James Holdsworth in the closing laps. A strong start by Holdsworth in Race 2 saw Crick forfeit the lead through the first corner, although Crick would retake his position with a daring pass on the outside of Quarry Bend.

A safety car brought out on the first lap shortened the race to a 2-lap dash, and after the restart Crick would again trade places with Holdsworth as the pair scrambled to the finish line, before the composed Crick ultimately fended off the charging Holdsworth to secure the win.

Staring down the barrel of a rare Bathurst clean sweep, a feat achieved only by Supercars Championship driver Will Brown in the category, Crick would have been forgiven for feeling nervous before the final race of his weekend. Any nerves were quickly masked by a steely determination, as the 23 year-old made a strong start to Race 3 and never looked back. In another safety-car affected race, Crick approached the formidable circuit with a calculated and confident drive which saw him run away with 300 Championship Points for the weekend, and the best possible start for his 2021 campaign.

Crick ultimately reflected on his weekend with a strong sense of pride and satisfaction with his efforts.

“It doesn’t matter what category you’re in, to win one at this place is a dream come true and so this has been a very special weekend to take out all 3 races. We had some hairy moments and James (Holdsworth) gave us a scare at times but I just looked to stay aggressive and play to my strengths instead of worrying about what everyone else was trying to do around me.”

“I think it’s so rare for a whole weekend to pan out in the way it did, but I’m certainly not complaining! Stoked with the package that the team provided and hopefully we can have it firing again when we return to the track at Winton in a few months.”

Crick and the Toyota 86 Racing Series will feature next at the Winton Supersprint between the 29th and 30th of May.