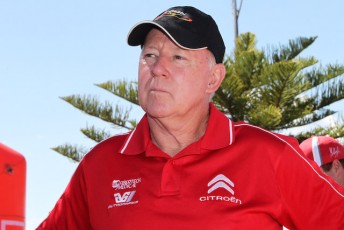 Cremen also confirmed what had long been suspected, that the Citroen DS3 that Eli’s is leading the East Coast Bullbars Australian Rally Championship in, must leave the country and return to the Middle East straight after Scouts Rally SA.

“We’re going to re-shell the car after the Coffs Harbour accident, have it back to perfect for the final Round to give Eli the best possible shot at the Championship, and straight after the event it’ll be on a boat to Dubai,” commented Ron.

Cremen went on to say that he had hoped to run Eli and co-driver Glen Weston at the final Round of the Middle Eastern Rally Championship, but that the shipping schedules have scuttled those plans.

“The car has to leave straight after South Australia, and it won’t make it to Middle East in time for the Dubai Rally,” he said. “Ideally I would have liked if South Australia wasn’t a necessity, we could have sent the car early and made it to the Middle East with enough time.”

Instead he’s opening up his list of international contacts in the hope of securing some overseas outings for Eli in 2016. “I’m leaving for China and we’re looking at some opportunities for him there and there are opportunities for the Middle East too, he could easily come up there to do something,” he said.

“I’m going to be working like crazy to open some doors, Eli’s really keen to do that, and it doesn’t mean that precludes doing any events here in Australia but at this stage that looks unlikely.”

And with the ECB ARC opening regulations to allow four-wheel drives to compete head-to-head with the current crop of two-wheel drives, Cremen is unsure what plans the team will have past the end of the year.

“There aren’t any real plans looking ahead. We’ve shown that these cars (Citroen DS3) are as fast as the guys competing in four-wheel drives, but you’d start every rally at a disadvantage and would need to put in a giant killing performance every stage to make sure you’re in with a shot at victory.”

“It’d only take one wet event and the two-wheel drives just won’t be able to keep up,” Ron commented.

That suggests that Citroen’s official presence will draw to a conclusion at the end of the season, with Cremen and privateer Adrian Coppin both confirming in recent days that their respective cars are departing the country. Tony Sullens though appears likely to retain his car, unless an overseas buyer can also be found.