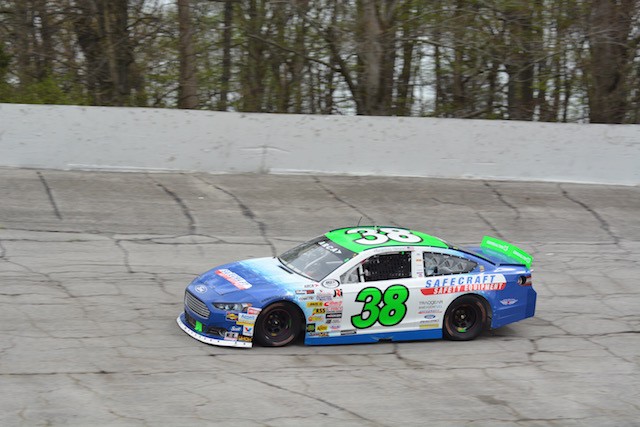 MEDIA RELEASE: Sheldon Creed, full-time driver of the No. 38 Safecraft Ford Fusion, remains optimistic for the future despite his finish in the ARCA Racing Series presented by Menards Kentuckiana Ford Dealers 200 at Salem Speedway this Sunday.

Coming off his ARCA Racing Series debut in Nashville where he finished seventh, Creed had the momentum to be one of the most competitive drivers in Salem. After qualifying in the seventh position, the team knew the car was going to be one to beat.

However, in Salem, tire wear is problematic, so Creed took it easy in the beginning to save tyres.

Instead of charging to the front, he took his time to make aggressive passes among his competitors which means that he stayed within the top-10 most of the day.

“We ran inside the top-12 the whole day, but the car got really tight in the beginning. After making a few pit stops to get new tires and adjustments, the car felt great. It really helped us to get back into the top-10.”

Creed felt like he had a top-5 car, but on one of the last restarts, he entered Turn 3 too high and got into what he thinks may have been oil on the track. He ended up hitting the wall which ended their efforts for the day; however, he officially finished in the 20th position.

“It’s a little frustrating considering how fast our car was and how good it was handling towards the end of the race, but I’m still learning every time I get into the car. I learned a lot about Salem, but I also learned more on how the cars handle. I’m grateful to be able to have this opportunity to learn. I’m taking these lessons into Talladega with me. I can’t wait to get behind the wheel to draft at the high banks of Talladega,” Creed said.

“Thank you to everyone that’s been helping us out. Safecraft Safety Equipment, NexGen Fuels, MOMO Motorsport, and all of the crew guys getting the cars to the track every week. This opportunity wouldn’t be possible without all of them.”

About Safecraft Safety Equipment: Safecraft is a supplier of safety equipment for motorsports, aviation, and marine industries. They specialize in high quality fire suppression systems that are used in a very wide range of racing. Their extinguishers are used more than any other brand in NASCAR, NHRA, and SCCA.

Be sure to follow Lira Motorsports on social media; Facebook.com/LiraMotorsportsFL; [email protected]