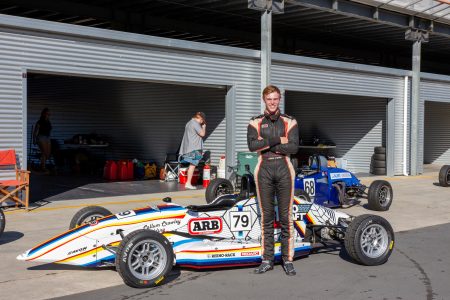 Feilding’s Callum Crawley, 18, has ended his debut season in the New Zealand Formula 1600 Championship with a round win at Pukekohe Park Raceway over the weekend. Crawley took two races wins and the Ron Frost Memorial trophy in his Career Racing Spectrum Formula 1600.

The final weekend of the championship started off promising for Crawley who won the 2018/19 Hi-Q Components NZ Formula First Championship the last time he raced at the Pukekohe circuit.
The 20-minute Qualifying session was the best of the season for Crawley, setting the second fastest time on the way to his first front row start in the category.

“Qualifying was a far less hectic affair than last weekend, and I managed to put in a strong time around the middle of the session, securing my spot on the front row.” said Crawley.

While the opening race of the weekend, ten laps, didn’t go exactly to plan for the Manawatu man, Crawley was able to make the most of the situation and recovered to a solid fourth place.

“Starting off P2 for the first race I didn’t get the best start, falling back a bit down the order, but managed to recover and make my way back to fourth place.”

Race two, again ten laps in length, saw Crawley get a better start than the previous race. Still not able to hold the lead from the get-go, he slipped to third but was able to quickly regain the lead in the later part of the opening lap. He then stayed there for most of the remainder of the race to win.

“Once again started off of grid two, getting a better start this time I couldn’t quite get to the inside and slipped down to third. I got a great run down the back straight and managed to grab the lead coming into the hairpin, I managed to stay there for most of the rest of the race, not without challenge, however!”

The third and final race of the weekend, this time 12-laps, was a similar affair for Crawley as he dropped positions off the start. After a few laps of intense racing, he was able to regain the lead and control the race before edging out the eventual champion to the line.

“The feature race, and with the Ron Frost Memorial trophy up for grabs, everyone was keen to come past the chequered flag first! After a better start I slotted into 3rd behind the leaders, then after a hard-fought few laps I again managed to slip through into first position.”

The win handed the Ron Frost Memorial trophy to Crawley and secured him third place in the national championship and was also the highest placed rookie in the championship.

“Overall it was an awesome weekend with some very hard and exciting racing! One I will not forget! Congratulations to Jordan Michels on his Championship win as well!”