Camden-based racer Cameron Crick once again displayed his adaptability in a strong showing at the recent ECB SuperUtes Series round, which was held as part of the Vodafone Gold Coast 600. In just his first time racing at the Surfers Paradise street circuit and in his second time racing a SuperUte, Crick displayed good pace throughout the weekend before his charge for a Top-3 finish for the round were crueller by an incident in Race 3.

Crick was among the pacesetters on Day 1, recording the 6th and 3rd fastest lap-times in practice 1 and 2 respectively, before qualifying in 6th for Race 1. Crick would be left to rue an error in qualifying, whereby the 20-year-old made contact with a wall after bouncing hard off the kerb.

“I think ultimately I was just pushing too hard and trying to squeeze every inch out of the rig, and that was the result. There’s a very small margin for error at the street circuits and unfortunately we came unstuck there. But the ute felt good so we knew that we’d have a chance to amen up for the incident come Race 1.” Crick explained.

Crick would guide the #87 SuperUte from 6th to 4th in Race 1, in a clean and calculated effort. The young speedster replicated his 4th place finish in Race 2, an impressive effort after the race was started from a reverse grid. Such strong results left Crick poised to make a run for a Top-3 finish for the round, however his weekend would be cruelly ended by an incident on lap 1 of Race 3, where Crick would be left no room to exit the first chicane and was forced into the tyre-wall. The incident launched the Team Triton entry up onto two wheels, and caused heavy damage which left Crick unable to finish the race.

Whilst the disappointing finish for Crick cruelled his chances of finishing with a podium for the round, the 20-year-old remained upbeat about the weekend and satisfied with the overall showing by the team. The 20-year-old deliberated that;

“Whilst it didn’t end the way we’d like, its been an awesome weekend up here. The atmosphere was fantastic and the event as a whole produced a lot of great racing. They boys at Team Triton as usual were all class and gave us some great Utes to run all weekend. I have to give thanks to Craig Dontas and the team for inviting me on board for my 2 rounds (At Ipswich and the Gold Coast), its been a terrific experience racing the Utes this year and given me a lot of experience dealing with some new tracks that I hadn’t raced before. It was also good to get involved with all the corporate events and speaking opportunities made available by Team Triton.”

Crick will conclude his 2018 Racing Season with the Toyota 86 Racing Series round set to take place between November 23-25 as a support for the Coates Hire Newcastle 600. Crick currently sits 3rd in the Series Championship and is eyeing a strong finish to what has been a breakout season for the 20-year-old.

Crick would like to extend his thanks to the team’s sponsors for the weekend: 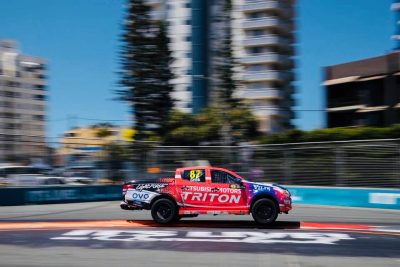