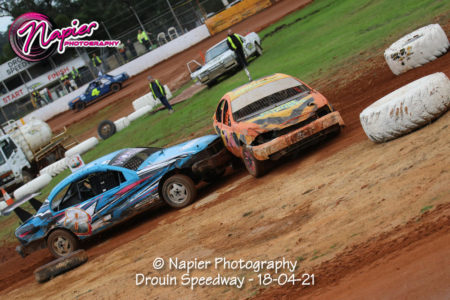 On Sunday, the Crash and Bash fans filled Drouin Speedway to witness all the action and were entertained by crashes, spins, wheels flying from race cars and an Adrian Brown and Lea Judd win. They were not the only stars of the show as Jack Yeomans won not one, but two finals in the Junior Standards and Jeff Blencowe and Rebecca Glassborow earnt chequered flags also.

The Crash and Bash began with a minute silence tribute and photo opportunity so that the family could hold some more memories of those that loved Teahn.

Crash and Bash Opens on this occasion just happened to be an all-male event and six qualifiers were held to get to their feature race Jackson Barneveld, Jason Judd, Time Cole, Anthony Sgroi, Anthony Segond, and Sgroi a second time won those with Alan George finding himself launching his car up and over onto William Leeson during those qualifiers, there was numerous hard hits to entertain.

The hard hits kept coming in the final of thirty laps, an event always hard to lap score. Essentially to score a lap, a driver has to pass over the transponder in front of the lap scorer and pass through the tyres on the back straight under the eyes of a second lap scorer. If the driver exits the dog leg and finds the fastest way possible to get back into the dog leg or misses it all together from there, then it is excluded.

Jason Judd one of the fan favourites led lap one, until he had damage he was in charge, from lap seven Craig McKendry took command and a third leader was Adrian Brown from lap eleven. Brown had never won a feature event for the class, despite being a long-time competitor, a long-time committee person and class representative.

On lap fourteen Anthony Sgroi passed Brown to take the lead and Brown was able to take control again when Sgroi’s car gave up due to damage on lap twenty. With ten laps to go Matt Sgroi was left chasing Brown. However, he was down laps and had to pass and re pass Brown to be in front. The chequer flag came out and Brown over thirty laps was sensational, the huge man took a huge win in front of plenty of loving fans and supporters with Alan George who rolled his car earlier in the day second one lap behind and Jay Miles and Ian Lamb on the same lap then Chris Miles in fifth two laps behind.

We caught up with Adrian after the race. “I am retiring from Crash and Bash at the end of this season and just focusing on my darling wife, the kids and the other racing I am involved with. To win before I retire not only for me, but for all their love and support is just a dream come true. Until you win a race you do not really reflect back and appreciate how hard it is to do once, never mind consistently. Thank you to everybody for their support.” Shared Brown.

Lea Judd has been the gun driver in Ladies Crash and Bash of late and in the Drive for Teahn she and Sarah Price shared qualifying wins and were never far from each other’s sights. A fifteen-lap final sorted them both out and Judd started with the early lead, then Price got past her and started to skip away before that unravelled and Judd took the lead again. At the finish line both Ladies were just .846 of a second apart and Judd claimed another win from Price, Bianca Brown, Kellie latham and Skye Day.

The Junior Standard Saloons race day began with the finish of the Junior Jam event from the previously held race meeting that was rained out before finals could be held. Jack Yeoman’s a Drouin member possibly in his last season of Juniors if the buzz remains true, took victory over twenty laps in an outstanding race as he and Harry Cecil zipped in and out of traffic. Cecil finished second and Matt Shankland who is most definitely moving to adult racing next season finished third with Cody Drennan and Hunter Carey rounding out the top five.

Later in the day, the Juniors also held a feature race for this weekends racing and this time Yeomans won again and by less than a second over Harry’s brother Owen Cecil. Nathan Miles finished in third, with Harry Cecil and Cody Drennan fourth and fifth.

Three Ladies won qualifiers in the Ladies Standard Saloons with Rebecca Glassborow winning her first ever heat race, then Sharlene Laidlaw and Sarah Price. An outstanding final race for the girls was then ran with Laidlaw the early leader before Glassborow took control from lap three. Glassborow then finished off the day with a her first ever feature win by less than half a second, in fact .367 of a second from Laidlaw, Jemima Borkowski, Kate Stuchbery and Sarah Price.

The next Drouin race meeting is May the 16th where Wingless Sprintcars are set to be the headline race event with all the club classes including Sports Sedans and Unlimited Sedans.