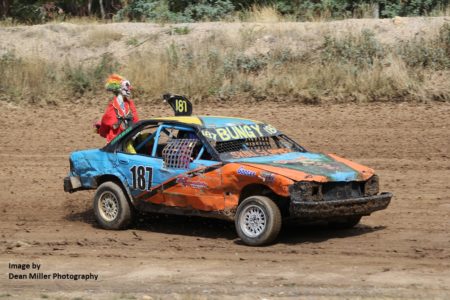 Crash and Bash Association members are all signed up and raring to go for the annual Daylesford Bash in the Basin and this time thanks to the tireless work of the Daylesford Speedway volunteers, we will be back running through the dog leg circuit which excites everybody from driver to spectators.

The association has been able to negotiate a five heat and final format for our Ladies and our Open Crash and Bash race drivers this coming weekend with action from Saturday through to Sunday.

After the success of our Nagambie and Avalon events everybody is keen to go with lots of fresh new names and returning names in our entry lists. The Ladies will be keen to hit the track after Danni Marshalls success at Nagambie was the last time they hit the dirt, whilst Jarrod Hughes is keen to add to his success after victory at Avalon in January.

In the Open Crash and Bash feature line-up there is a great list of strong competitors aiming to take the top step on the podium at the Sunday conclusion of the forty-lap feature race. Many of them locals to Daylesford which is terrific to see as the Crash and Bash Association once again has strong representation from Nagambie, Melbourne’s South East, and Daylesford. Next box to tick is the Yarra Valley, Alexandra.

In our Ladies line-up Lea Judd returns to a venue she won at last season when the association returned to Daylesford for competition. Danni Marshall will be keen to back up her winning start to this season, Kath House-George, Mel Argent, Nikki Sonnet, Steph Grace and Taylah Hughes lead an impressive list of racers aiming for the podium spots and the coveted first spot trophy.

The girls really had a crack last time at Daylesford with some of the most entertaining punishment of last season dished out in the final. This time with the dogleg thrown it and the cars slowed down a little, we may see even more action from the femme fatales.

Any interested future Crash and Bash racers can find out how to get involved by messaging us on Facebook under our association page or by messaging acting President Steve Mitchell or committee officer Ron George.