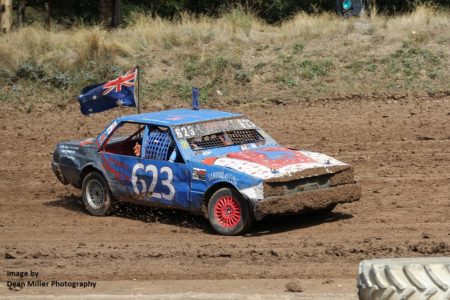 The excitement of Cars, Dirt, Beers, Engine noise, possibly more Beers and Crashing is back! Once again, the sound of metal on metal as bumper bars are slammed, doors scraped side by side and bits and pieces fly off the car is set to bring much needed smiles to our racers and our fans this weekend.

The Crash and Bash Association head to Nagambie Speedway for crazy fast-paced dogleg action this Saturday and Sunday where the ‘Andrew’s Car Removals Freedom for All’ feature event will take place thrilling what is going to be a large crowd.

The Nagambie Speedway Club have attracted large supporting line-ups and with the Crash and Bash headlining the show, it is going to be one massive weekend for all of us, on and off the dirt.

After our return to the Daylesford venue last season, we have seen an influx of racers from the Daylesford club put together Bash Cars to join us. At that meeting, Jarrod Hughes left with the victory and Jarrod will be behind the wheel again this weekend and one to watch for.

We have former Victorian champion of a few seasons ago William Leeson in the line-up and he makes one of three with Zac and Chris in the field. An announcer’s nightmare, good luck to those on the stick at Nagambie!

The team of Mark Hebblethwaite and Richard Lewandowski with both drivers having proved they are more than capable of winning and are most definitely consistent finishers.

Anthony Sgroi will stand out with some super new decal on his race car and it is alleged it makes the car look faster or go faster and we will soon find out, Daniel Kettles a long time Nagambie racer, Alan George, Jackson Basten, Bradley Trainor, and Kev Hughes the list is long of challengers.

In the Ladies, this weekend a small yet very competitive line-up has nominated and whilst Kellie Latham has shown consistently to be one woman on a mission at the front, expect a hungry pack including Steph Grace, Danni Marshall and others to be looking to secure the first season win.

The Crash and Bash Association has support for this event from Andrew’s Car Removals and we ask our member’s to support Andrew and his business with any removal work you require and perhaps enquiries to the sort of vehicle’s he is getting his hands on so you can source next race cars and/or car parts.

If you would like to known to be associated with the Crash and Bash with your business please seek out our committee members to discuss possible involvement. Race event sponsors, Awards at every event sponsors, end of season point score and fund supporters everybody and anybody is welcome to contribute.