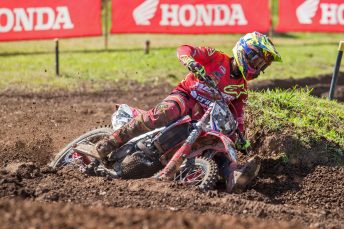 Crankt Protein Honda Racing Team’s Todd Waters came away from the second round of the 2017 Motul MX Nationals at Appin, New South Wales, with a hard-fought podium result after an eventful day on the track on Sunday.

In hot conditions the Queenslander established himself in a solid fourth position for most of the opening race before a costly error late in the race saw him drop to sixth.

As the heavens opened at the start of the second MX1 race, Waters put all of his racing experience to task as the rain brought on treacherous conditions for Australia’s best racers. Waters maintained a steady pace and focused on minimising the errors on his way to a rewarding runner-up result and third overall for the day. His strong finish has elevated him to fourth in the MX1 championship fight.

Meanwhile, MX1 rookie and Sydney local Luke Clout continued his learning curve at his home round. Clout raced to a brace of ninth places on his way to 10th overall, highlighted with a strong recovery in the water-logged second race. Clout got tangled in a first-lap crash out of the gates and surged from the back of the pack to an impressive ninth-place finish. He is now seventh in the MX1 standings.

The third round of the 2017 MX Nationals will be held at Conondale, Queensland on Sunday 7 May.