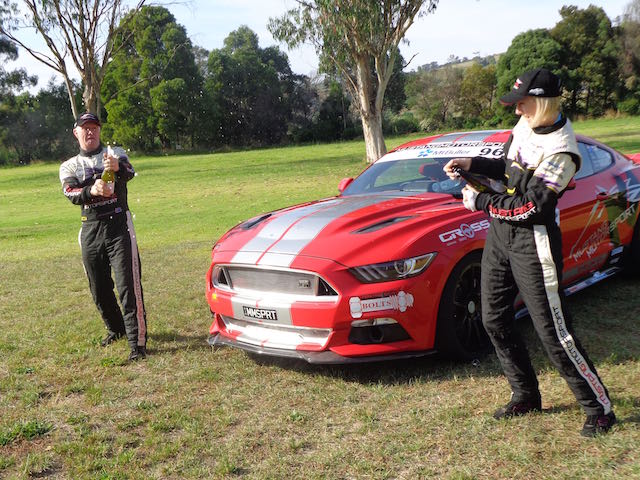 MEDIA RELEASE: Melbourne Mustang specialist Craig Dean has taken out the 2015 Australian Tarmac Rally Championship with a measured drive in the final round of the series.

The Snowy River Sprint was made up of 20 special stages over 320km, over roads in the hills behind the Victorian coastal town of Lakes Entrance, between Buchan and Orbost.

For the event, it was Kaplan/Hughes topping the classic podium, ahead of Ted Banks and Bruce Douglas (1971 Porsche 916) with Burton/Hannah third.

Dean and Quigley came into the final round of the four-event series with the confidence of a win in the previous event, the first in their brand-new 2015 Mustang. They had 224 points to the Catfords’ 185. Traverso and Webb were a distant third on 157.

There were double points on offer for the final round, which theoretically gave each crew a chance at the title, but in the end it proved academic. While Dean/Quigley claimed they were taking a relatively cautious approach because of the heat and a large amount of gravel on the road, both their rivals were out on Day One. The Catfords crashed and the defending champions blew a gearbox.

While the winning duo were delighted with the result, they both emphasised that taking a win without a real battle with their rivals was not the way they wanted to get the job done.

“It’s been a fantastic event and series,” said Dean. “The camaraderie of this championship is really special.

“We’ve had a terrific run in the Mustang. It just keeps getting better. We would have rather gone full-on against the others but that’s motorsport and things happen. We’ve thoroughly enjoyed competing against them and look forward to doing more of it.”

Classics winner Laurie Burton described himself as ‘ecstatic’ with his title win and says despite his advancing years, he will probably back up to do it all again in 2016.

“We’ve just been playing with the car and getting it sorted out but obviously it’s running well. Russell is doing a great job in the co-driver’s seat and we love these events.”

While the ATRC team prides itself on running rallies with an equal balance of competition and social life, there is also a serious side. Several auctions have been held to raise funds for the RRM Chaplaincy Team’s Life Care and Suicide Prevention Seminars and, across the year, competitors have raised more than $8000. This event alone contributed $2500 that will facilitate training for around 240 people to recognise the warning signs of suicide risk.

Mountain Motorsports has run more than 40 tarmac rallies and touring road events since 1995. Entry to the Australian Tarmac Rally Championship can be for the full series or as single events, and is open to all comers with three categories of entry available: full competition, touring and regularity. Further information is available from the website: http://www.australiantarmacrally.com/