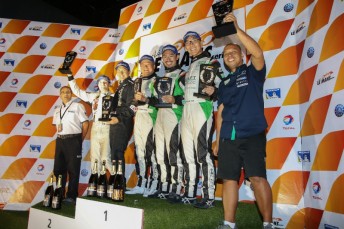 Craft-Bamboo Racing had a spectacular weekend (11/12 October) at the Shanghai International Circuit when it won the penultimate round of the Asian Le Mans Series to clinch the championship and drivers titles, as well as scoring two podium finishes in the GT Asia Series.

In the third round of the Asian Le Mans Series, Craft-Bamboo Racing entered its Ligier CN prototype with drivers Samson Chan (HKG), Naoki Yokomizo (JAP) and Kevin Tse (MAC). The team qualified on pole in class on Saturday to start the race from fourth overall on Sunday.

Chan started the race and held the lead throughout his stint. With the competitor car of Avelon Formula evenly matched with the #77 Ligier CN, the pair of prototypes stayed close throughout the race, taking it in turns to take the lead.

But, after three hours of competition, it was the Craft-Bamboo Racing team that crossed the line as the CN class winners to clinch the championship title in the process.

“The team did a fantastic job this weekend,” comments Tse. “We tried a few different setups in practice and found the sweet spot in qualifying.

Our race pace was very good, as all three drivers delivered consistent laps, and we were all able to pull away from the competition. It was a great team effort and we’re looking forward to finishing our season in first place again in Sepang.”

The race win was enough for the Hong Kong-based team to take the championship title before the season finale in Sepang in December and, although the drivers title has not yet been wrapped up, it is decided that it will be a Craft-Bamboo Racing driver with only Tse and Chan still in the running.

“Craft-Bamboo Racing is well known for being at the forefront of motorsport not just in Asia but around the world and this adds to our long list of successes.

It’ll be exciting to see which of our drivers will take the driver’s championship title at Sepang in December. Kevin has a considerable points lead but anything can happen in racing!”

Also at the Shanghai International Circuit this weekend were the 11th and 12th rounds of the 2014 GT Asia Series. With Frank Yu’s (HKG) regular team-mate Stefan Mücke (DEU) contesting the FIA World Endurance Championship in Japan, British driver Richard Lyons once again joined the team in its V12 Vantage GT3 and looked to continue his podium success.

“Before this weekend, I’d competed with Craft-Bamboo Racing four times and been on the podium every time, so I wanted to continue that,” commented Lyons.

“Yesterday’s race had a crazy start. There were four cars all trying to take the early lead and I got pushed out. I didn’t back off though and climbed up to second place.

“Frank did an amazing job in his stint and we finished third. It was unfortunate because if we had had a better qualifying session we could have got a better start. But, I’m happy to get a podium and pleased with our performance.”

In race two of the weekend, the pair was determined to get higher up the podium and Yu was straight out the blocks, making up a couple of places, while staying out of trouble.

He handed over to Lyons to make his attack but a safety car reduced the Brit’s time on track and didn’t give him the chance to climb to the lead.

“Unfortunately there was a safety car that reduced my driving time,” commented Lyons. “We had a good pit stop but I didn’t have enough time to catch the race leader. I know we could have, though, the Bentley was quick but we were quicker, we just ran out of track.”

In addition to the results in Shanghai, Craft-Bamboo Racing’s FIA World Endurance Championship team took pole position and third place in the Six Hours of Fuji. Read more about it by clicking HERE.