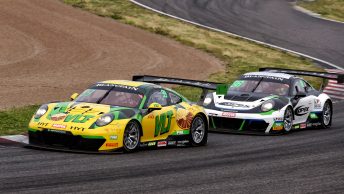 Craft-Bamboo Racing finished their Blancpain GT Series Asia weekend in Suzuka with the biggest points haul of any team, taking 46 points to put them within 25 points of second place in the teams’ standings. The #88 Porsche of Nick Foster and Devon Modell took its first podium of the season with a third place finish in race one, followed by the #99 VLT Porsche in P4, which recorded its highest finish of the season so far. Sunday’s race two saw the #99 pairing of Darryl O’Young and Peter Li Zhi Cong put in an incredible performance to fight all the way from P17 to P4, while the #88 Porsche came home with another strong points finish in P8.

Nick Foster was in charge of the #88 Porsche’s opening stint and made a good start to begin challenging for position from P8. Foster was able to take four places before a safety car period began and halted his progress. The #88 driver was able to maintain his position after the restart but was once again prevented from gaining momentum after a full course yellow flag was waved. Foster was caught out on the restart though and lost a positon as he got back up to speed. With the pit window about to open, Foster wasn’t given the time he needed to be able to close in on the leaders but handed the Porsche over to Modell in P6. Modell was able to rejoin the race in P7 and begin his march to the flag. The British driver battled the conditions and traffic to bring the #88 Porsche home in P8 to score its second points finish of the weekend.

Peter Li Zhi Cong started race two from P17 and managed to take a position by the time the safety car was called out. Li made an excellent restart, allowing him to gain the ground necessary to move his way up the order to P12 over the next couple of laps. Unfortunately, the full course yellow flag saw Li slip down the order to P14 after the race was restarted for the second time. As soon as the pit window opened, Li dove into the pits and switched to O’Young, who managed to get the #99 VLT Porsche up to P6 after the field had settled down following the closure of the pit window. O’Young had found good pace and was putting in consistently quick lap times despite the conditions. The Hong Kong driver made his way into the top five with ten minutes left and had P4 firmly in his sights. After biding his time, O’Young made a great move up the inside of a tight hairpin bend to claim P4. Thanks to his pace, he would have been in the running for a podium but there wasn’t enough time for him to close the gap and challenge for position. O’Young crossed the line in P4, climbing an incredible 13 places to help take the #99 VLT Porsche to its highest finish for the second time that weekend.

Frank Yu started on pole position in the GT4 class and managed to maintain the top spot throughout his stint before handing over to Jean-Marc Merlin at the end of the pit window. With the safety car and full course yellow periods, Frank was unable to create the gap he would have liked, and due to their 10s success penalty from race one, Merlin rejoined the race in P3. It didn’t take long for the #77 driver to close in on the #10 Porsche though, and he was soon able to take away P2 in what was looking like a very promising challenge for the top spot. However, a drive-through penalty was issued to Jean-Marc for speeding in the pit lane and after the penalty had been served he found himself at the back of the field in P5. The gap was far too large to make up but Merlin brought the #77 Porsche back home safely and the pair is now looking to Fuji to make a comeback.

“Just delighted that both cars finished in the points and that Darryl and Peter were able to get another P4 finish. The #88 Porsche was very unlucky with the safety car, I think they definitely could have finished on the podium if the luck had gone in their direction. I am really pleased that we have had strong results this weekend as I know how much hard work all the mechanics and engineers have put into the last month. We are now really looking forward to Fuji, which is a circuit that we have done well at in the past.”

“The race was hard with the ever worsening conditions. Nick did a great job in the little time he had that wasn’t under a safety car or full course yellow to bring us up the order and keep the car on track. We lost out in the pits due to our penalty from yesterday’s race. It was a relatively uneventful race for me keeping the car on the track and trying to pick up any places that we could. Overall the weekend was a big positive with the podium in race 1 and everything learnt across it, which can be built upon at the next round.”

“We decided to stay on slicks for the start, which was the right decision and the pace was really good. I made up a few spots on the opening lap but then got caught out with the full course yellow and safety car hitting us when we could have made up the most time. Overall though, the car was really good and we made the right decision but unfortunately it didn’t go our way. We still managed to come out of the pits in P5 even with our success penalty but we just didn’t have the pace on the run to the flag. Positive weekend for me, great to join the team this weekend and I hope I did them proud.”

“It was an eventful race with the constantly changing weather and we made the decision to start with wets and that was probably the right move as we were able to take positions and gain a lot of time back from P17. At the end we were in quite a battle but I was having a tough time with the front tyres and the car was understeering a lot, which didn’t give me the pace to fight for P3. I also had to defend from the Lamborghini behind me but overall it was a really hard fought race and we worked hard for this P4. It was a really great weekend and I am looking forward to Fuji.”

“I am very happy with the result, for us to comeback from P17 to P4 is just great. To have two top-four finishes in one weekend shows that the car is continuing to develop as well as my confidence and pace behind the wheel.”

“The conditions today were really tough and there were two safety cars during my stint, which halted my pace. I could have pulled a bigger gap but the safety car prevented that, so when I handed over to Jean-Marc the gap was only about 4s. Unfortunately, we got a drive through penalty and that was it, but we managed to gain some points this weekend and now look ahead to Fuji.”

“It was a difficult time for me today in Suzuka. I took the car from Frank in P3 after our ten second success penalty and was able to overtake the number 10 car on the first lap. I was then told that I was speeding in the pit lane, which I still don’t really understand. After that it was just about bringing the car back safely as the gap was too big to close after the penalty, so not a good day today.”