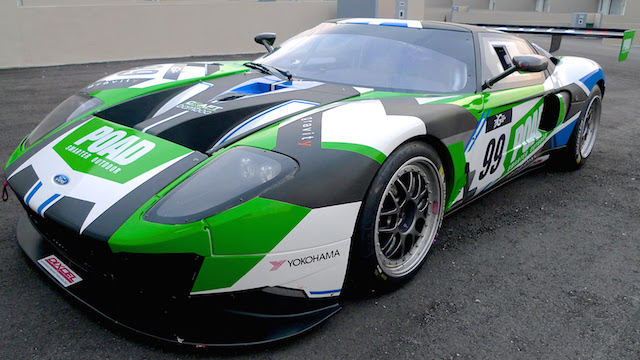 Competing against an international grid of GT drivers, Frank will be driving a Ford GT GT3, decorated by the team’s title sponsor POAD.

The special livery, which displays POAD’s logo in the company’s distinctive green corporate colour, creates a striking presence to capture the attention of the audience.

The Hong Kong driver, who also competes in the GT Asia series, will be looking to make his mark on the maiden event by securing a top result at the challenging street circuit, which is shaping up to become a fantastic event for Asia’s motorsport fans.

Frank will compete in the KL City GT Cup, which will serve as the weekend’s feature event. The sprint race will be held over 25 laps with Frank battling it out in the hopes of being crowned the inaugural champion.

The street circuit layout will provide multiple challenges, even for the seasoned professional. Not only will he be contending with the tight confines and concrete barriers but he will have to adjust to the uneven surface that street circuits are known for.

To extract the most performance, he will be finding a balance between a conservative and aggressive driving style, as any mistake could prove costly to the Craft-Bamboo Racing driver.

Frank’s focus will be on a clean and quick qualifying lap, with the aim of getting himself to the head of the pack as passing will be a difficult proposition on the narrow Kuala Lumpur streets.

The international GT driver is no stranger to competing under these tough conditions, having raced at many famous international street circuits.

Achieving two podiums in Macau, a third place in 2012 and a second place in 2013, Frank, has also raced at the Marina Bay Street Circuit, Singapore and at Australia’s famous, Mount Panorama, in Bathurst.

POAD last title sponsored a Craft-Bamboo Racing car for the historic Macau GP in 2014 and have decided to proudly support the team once again at the first ever Kuala Lumpur Street Race.

Both POAD and Craft-Bamboo Racing share a desire to compete at the highest levels and deliver results, making it a perfect partnership both on and off the race track.

POAD, whom are a regular team sponsor, have stepped up as title sponsor for this special race in celebration of their 25 years of outdoor advertising excellence in uncovering the unseen possibilities for numerous business partners.

The challenging 3.2km circuit winds itself through the heart of Malaysia’s capital city, producing a brilliant spectacle for Asia’s motorsport fans. Beginning in front of the iconic Petronas Twin Towers, the GT cars will race at speeds over 200 km/h along the well-known streets of Kuala Lumpur as they battle to become the first KL City GT Cup champion.

“I am very excited that the Malaysian government put together a street race in Kuala Lumpur. As a young boy I was fascinated by Macau, Monaco and all the historical street races that existed around the world and to be participating in the inaugural race is an absolute privilege.”

“The Aston Martins from our GT Asia series campaign couldn’t make it to Malaysia as they are on their way back from Japan, so we decided to use our Ford GT. We put the program together in six weeks and the team has done an amazing job rebuilding and decorating the car. Our recent shakedown at Johor was very successful but it will be a challenge for the Ford GT to compete with the updated GT3 cars but I am going to do my best.”

“We are honoured to be the sponsor of the Craft-Bamboo Racing Team for another year. Our collaboration is forged on a shared desire to push the boundaries and deliver inspiring results that lead our respective fields. Focus, dedication and passion are critical for both sporting success and the creation of boundless outdoor advertising possibilities. Sharing the same spirit, we are proud of the Team’s achievements and are truly delighted to see that motorsport continues to grow across Asia.

“POAD is in their second year of partnership with Craft-Bamboo Racing and we are happy to have them as a title sponsor for our entry into Kuala Lumpur’s maiden street racing event. I hope that we can come away with a good result to help celebrate their 25th anniversary and our continued future partnership.”