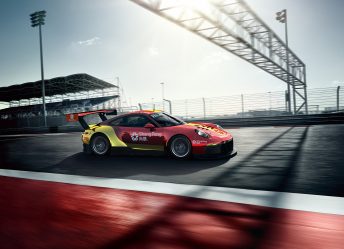 Craft-Bamboo Racing have their sights set on the Blancpain GT Series Asia podium in Shanghai this weekend, where they will attempt to score their third podium in as many rounds. Nick Foster and Devon Modell will pilot the #88 Shang Peng Porsche, which wears a special new livery this weekend, while Darryl O’Young and Marvin Dienst will fight for glory in the #99 VLT Porsche. O’Young’s regular partner Peter Li Zhi Cong is unable to compete this weekend due to a reoccurring ankle injury and has not been cleared to race. He is replaced by 20 year old Formula and GT driver, Marvin Dienst. Frank Yu and Jean-Marc Merlin regained their P1 spot in the GT4 drivers’ championship in Fuji and will now be focused on securing a strong lead before the series heads into the final round of the season in Zhejiang, China.

Thanks to the support of Shang Peng this weekend, the #88 Porsche will be decorated in a brand new livery. The striking combination of Shang Peng’s corporate red, combined with the rich gold leaf on the rear, embodies the #88 with good luck and prosperity in Shanghai. With Nick Foster and Devon Modell having scored two podiums so far this season, they will be on the hunt for a third and will be hoping to take that next step to the very top of the podium. The #88 Shang Porsche was very strong here last year and with a huge crowd of Shang Peng supporters to cheer them on, Modell and Foster will be the ones to watch.

With Peter Li Zhi Cong unfortunately unable to contest the Shanghai round, Marvin Dienst has stepped into the #99 VLT Porsche. Dienst is an experienced formula driver, taking the 2012 Formula BMW Talent Cup and the 2015 ADAC Formel 4 championships. Most recently his experience in the Porsche 911 GT3 R in the ADAC GT Masters and in the FIA World Endurance Championship in the Porsche 911 RSR makes him the perfect fit for the #99. Dienst’s strong pace behind the wheel of a Porsche combined with Darryl O’Young’s experience in the 911 GT3 R and at the Shanghai International Circuit, will make for a compelling line-up and one that is sure to challenge the best pairings on the grid.

Frank Yu and Jean-Marc Merlin currently lead the GT4 drivers’ championship by three points over their season rivals in the #10 Porsche entry. With such a small margin, the #77 pairing will have to deliver a very strong weekend of results to ensure they stay in the lead for the final round of the competition. Both Yu and Merlin know the Shanghai circuit well, which gives them ample time to set up the car in the two practice sessions on Friday. The #77 pair has been an unstoppable force all season and has continually demonstrated their dominance on track, with faultless stints from both drivers. The pressure is on but the experience of Yu and Merlin is on their side and they will be pushing to take every point they can.

“We are delighted to be in Shanghai this weekend and to be supported by our partner Shang Peng. The #88 Porsche of Devon Modell and Nick Foster is looking incredible with its new red and gold livery, and I am sure they will continue their streak of podiums this weekend. We unfortunately have lost Peter Li to an ankle injury for this round but have found a replacement in Marvin Dienst, who will be tasked with guiding the #99 VLT Porsche to a top result. I know that Frank Yu and Jean-Marc Merlin will be out to extend their lead in the GT4 drivers’ championship to put them in a strong position to take the title in the final round towards the end of October.”

“We are coming off the back of a strong result and very strong pace in Fuji, it fills us with a lot of confidence as we head into this weekend. Shanghai is a very different track to Fuji but we carry a bit of confidence and car speed from previous weekends. We have a small BoP change, which hopefully won’t affect us too much but we look forward to doing what we do. We have the big influence of Shang Peng here this weekend, so it is important for us to put on a big show for them. We will have some home ground support from them and I am very much looking forward to the challenge.”

“I’m very much looking forward to this weekend in Shanghai where we will hopefully build on the results last time out and go one step better. This weekend has the added extra of a new livery for our car from Shang Peng who are bringing along many fans to cheer us along, which hopefully will give us the boost to reach the top step.”

“It’s a big weekend for the team as we head to China for the final two rounds of the Blancpain GT Series Asia season. We had good pace here last year so we’re looking to put in a strong qualifying to give us the best shot at the race win.”

“I am really happy to join Craft-Bamboo Racing for the Shanghai round of the Blancpain GT Series Asia. I can’t wait to get out on track and I am really looking forward to driving the famous VLT Porsche. I have some good experience in the 911 GT3 R, so I am hoping that I can do my best and help Darryl O’Young and Craft-Bamboo Racing achieve some really good results this weekend.”

“I am excited to be back in the car, we are just leading the championship by a few points. We really need to push hard to get a good result and Shanghai is a familiar track to me. We should be on the pace and hopefully we have a trouble-free weekend and get some good results to extend the lead.”

“After the good results from Fuji, I am looking forward to being back in Shanghai. It is a track that I know well and I have had good results there in the past. Our focus will to be to extend our lead in the championship to put us in a good position for the final round of the season in Zhejiang.”