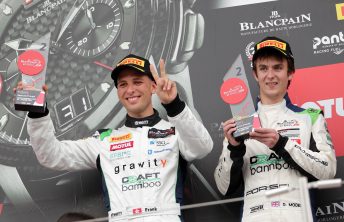 Craft-Bamboo Racing has kicked off their Blancpain GT Series Asia weekend with great results in both the GT3 and GT4 classes. The #88 Porsche of Devon Modell and Nick Foster scored a hard fought second-place podium in the GT3 class, followed by Darryl O’Young and Peter Li Zhi Cong in the #99 VLT Porsche in P4, with both cars scoring a huge chunk of points for their respective championship title fights. Frank Yu and Jean-Marc Merlin scored their third win of the season with another great drive, taking the #77 Porsche Cayman GT4 Clubsport MR from fourth to first in the GT4 class, marking a great start to their Blancpain GT Series Asia weekend in Japan.

Devon Modell got the #88 Porsche’s race started from P7 and fought hard to make his way up to P6 by the compulsory pit stop where he changed over to, Nick Foster. After the pitstop window had closed and the grid had settled, Foster carved his way up the field from P4 to P2, scoring the #88 Porsche its first podium of the season.

Darryl O’Young started on pole and did a great job to hand the car over to Peter Li from the front of the field, allowing him to come out ahead of the #5 Audi and slot into first place. Li had the pace to fight with the leaders but couldn’t continue defending his position to the chequered flag, ultimately finishing the one-hour sprint race in P4 to give the #99 VLT Porsche its highest finish of the season.

Jean-Marc Merlin began his fight in the #77 Porsche from P4 and put in a mega stint to take the Cayman up to P2 by the time he handed over to, Frank Yu. Yu spent his stint closing in on the #17 Porsche and in the final moments made a great move up the inside to snatch the lead and finish the race in P1.

“I am really pleased to get two cars in the top four and onto the podium with a second place. We have been working very hard on this program the last few months and I am delighted that everyone’s hard work has paid off. I am looking forward to seeing what we can do in race two tomorrow. I am also very happy to see the GT4 pairing of Frank Yu and Jean-Marc Merlin continuing their success as they build what looks to be a championship winning campaign.”

“We didn’t qualify as high as we’d hoped due to some traffic at just the wrong point in the final sector but still managed P7, which was an improvement on last time out. The start of the race was tough, as the track is so narrow here and the final chicane was chaos on the first lap with 3 or 4 people overshooting it. Once the race settled down we had good pace and picked off a couple of cars but our progress was halted by a GT4 car forcing me to take to the grass. Boxed and handed the car to Nick who did a great job passing 2 cars on track to bring us home in P2. Hopefully we can go one better tomorrow as the car feels really good here.”

“We managed to jump a few cars in the stop and when I came out I was behind one of the Audis. It was quite hard to pass in the two-car tow with so much aero. I wanted to look after the tyres because it was a long run to the end and then I just used the traffic to get ahead of the Audi. I was sitting behind Peter and then he made a little mistake and I made my move. Overall, it was a really positive day, the car is quick. Second place is very impressive and it is a great result for my first race with Craft-Bamboo and Blancpain GT Series Asia.”

“A little disappointed with the race today, I made a mistake on the first lap at the chicane and Marchy Lee was able to get by. Overall the stint went well and the pace was good. Peter did a great job and drove a clean stint but hit some traffic and was overtaken. Disappointed that we missed the podium as the car had the pace for it but our car made a huge step forward and it is the best result we have had.”

“Finished P4 in race one, our best finish yet! My teammate did a good job during the race. For me, I need to build up the performance and keep improving during the whole weekend. I will now focus on tomorrow.”

“Jean-Marc did a great stint. He started P4 and got to P2 very quickly and stayed with the leader, with only a 1.5s gap. We had a success penalty of 10s, so when I came out, I was about 14s behind. I pushed as hard as I could and there was a lot of GT3 traffic on a narrow track. When there were two laps left and I had cleared all the traffic, I kept pushing and made a move in the hairpin and stayed ahead for the win. Thank you to my teammate, the team and Porsche Motorsport Asia.”

“I had disappointing qualifying pace and had to start from the back. I managed to overtake three cars in the turn 1 mêlée and then focused on keeping up with the leading car. I was on his tail when it was time to give the car to Frank, so in summary a good day at the office. Frank did a great job to close the pit time handicap and overtake for P1 at the end.”