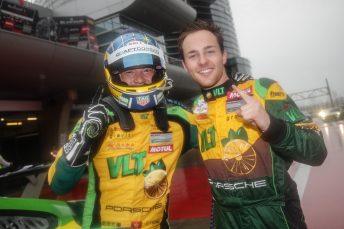 Craft-Bamboo Racing has taken their first Blancpain GT Series Asia victory with the #99 VLT Porsche of Darryl O’Young and Marvin Dienst, who scored a dominant race two win in the wet. Dienst started from P4 and put in a mega stint to hand the car over to O’Young in the same position. Thanks to the team’s perfectly timed pit stop, O’Young was able to jump the competition and rejoin the race in P1. The Hong Kong driver had a nine second gap over P2 and put in a flawless showing to grow that lead to 16.4 seconds by flag fall, giving Craft-Bamboo Racing and Porsche their first win in the Blancpain GT Series Asia.

“We are delighted to have won the race today, particularly after the #99 car lost out to the safety car yesterday. Both drivers put in an amazing stint in really difficult conditions, which suited our car but this is a huge acheivement and a just reward for all the serious effort, hard work and determination that the whole team has put in. I am absolutely delighted for the #99 VLT Porsche 911 GT3 R to have won the race.”

“Craft-Bamboo Racing has been working so hard since we got the Porsche, this is our first win and we are just so ecstatic because we have given everything to get here. Marvin did a fantastic stint and everyone has worked so hard, this all goes to the team because they have always done their best to put in maximum effort. I’d like to thank Porsche for their fantastic support, the car was fantastic today, it was unbelievable.”